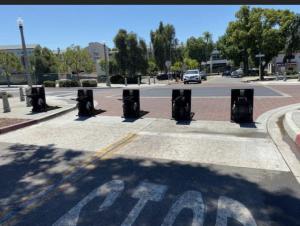 Meridian Barriers were our solution. They were quickly installed, very maneuverable, and provided the level of safety we were seeking.”
— La Mesa Police Department Capt. Matt Nicholass

PASADENA, CA, UNITED STATES, August 4, 2020 /EINPresswire.com/ — As last Saturday neared, it became clear to police in La Mesa, CA that the planned Black Lives Matter demonstration was going to attract large numbers of demonstrators. That is when law enforcement called Meridian Rapid Defense Group. Meridian quickly arrived with its mobile anti-vehicle barriers. Within hours Meridian, using its SAFETY Act Certified Archer 1200 barriers, sealed off an entire “safe zone” in La Mesa where both protestors and police could operate without fear of being struck by a rogue vehicle.

Back in May, rioters on foot and in cars caused widespread damage to many local shops and businesses. This time the local police were taking no chances.

"The City of La Mesa has experienced several protests recently and one resulted in a riot with attempts to burn down our police facility," explained Capt. Matt Nicholass from La Mesa Police Department. “During the planning of an upcoming protest on August 1, our goal was to provide the safest area possible for our protestors, law enforcement personnel, and citizens.”

The barriers and an Archer beam gate were placed on streets at the most critical access points to the designated protest zone. Law enforcement strategy was designed specifically to prevent vehicle traffic from entering high pedestrian areas.

“Meridian Barriers were our solution,” said Capt. Nicholass. “They were quickly installed, very maneuverable, and provided the level of safety we were seeking. They provided reassurance that the protestors and officers were protected.”

Peter Whitford, CEO of Meridian said, “We are a company which specializes in responding rapidly to requests of this type. We had the Archer barriers deployed and then quickly removed allowing the city to get back to normal. Once again we are proud to be the 'go-to business' when authorities need a quick solution to a particular situation.”