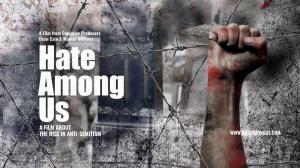 "We are very thankful that the Academy has given attention to this important subject that affects all of us." – David McKenzie

"We are very thankful that the Academy has given attention to this important subject that affects all of us,” said McKenzie. “I am honored that they recognized this work so that hopefully it will bring more attention to this subject matter and shine a light on the terrible situation that hate generates among people.”

Distributed by Associated Television International (ATI) and premiering on Popstar! TV, Hate Among Us from executive producers David McKenzie, Laura McKenzie, Dean Cain, Montel Williams and Sergey Sarkisov, tracks the origins of hate crimes against members of the Jewish faith as well as many others and the ultimate murder of an estimated 6 million European Jews by the Nazi regime and its collaborators that are still being exhibited by hate groups to this very day from Europe to the United States and throughout the world.

The film follows the family members of Mireille Knoll, an 85-year-old Holocaust survivor who was murdered in her Paris apartment in 2018 in an anti-Semitic hate crime. The film also depicts unique perspectives on antisemitism from all cultures and all faiths, from within historic Jewish neighborhoods in Europe, to the streets of Charlottesville and Pittsburgh's Tree of Life Synagogue massacre. McKenzie’s direction told real stories of current survivors of violent antisemitism to those of the Holocaust. Hate Among Us illustrates how renewed intolerance is taking root in our communities, institutions and universities, with far reaching consequences around the world.

"It helps us to achieve our goal,” said Dean Cain, “which is to shine a light on hate and help educate people about the history and the current growth of hate and anti-Semitism. We are very excited about this recognition and hope this brings more awareness to this serious humanitarian crisis."

Montel Williams agreed. “When we set out to make Hate Among Us, we knew it was an urgent project. In these divided times, we have to remember that hate and bigotry are never the answer."

"The response of the community from this inhumanity proves that this topic is very important to many people as well as being very relevant," states Sergey Sarkisov. "I do believe that Hate Among Us contributes to the proper understanding and empathy that any kind of national, racial or religious hate continues to be an existing danger and every human, including humanity itself, can be a target."

Hate Among Us is the second film from the producing team of the McKenzie’s, Cain, Williams and Sarkisov with their first being the also critically lauded documentary Architects of Denial which shed light on the Armenian Genocide that is still not fully recognized as of this day. That film was also produced and directed by McKenzie.

Hate Among Us will be re-released this fall to major outlets worldwide.