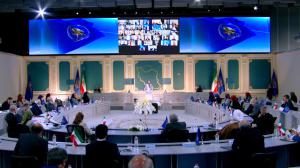 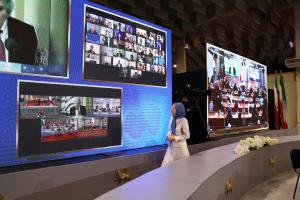 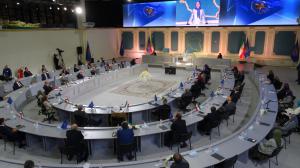 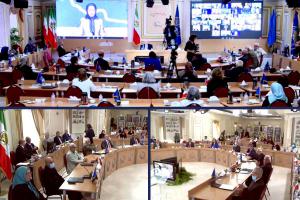 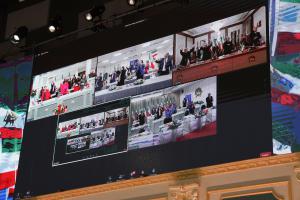 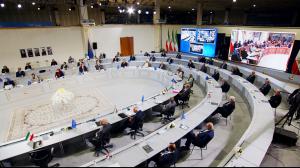 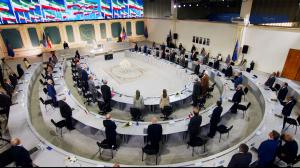 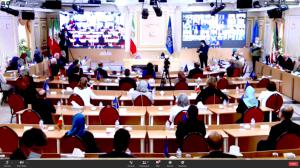 PARIS, FRANCE, July 29, 2020 /EINPresswire.com/ — NCRI holds a Three-Day plenary session via a Virtual meeting connecting 44 locations in 11 countries on the beginning of its 40th anniversary of the founding

Maryam Rajavi: Over the past 40 years, the NCRI has been the most effective force against the ruling theocracy. It is now advancing with all its might to overthrow the mullahs’ regime and establish democracy and people’s sovereignty

The three-day online session of the National Council of Resistance of Iran (NCRI), which began on Thursday, July 23, connecting 44 locations in 11 countries, including France, Germany, the United Kingdom, the United States, Sweden, Norway, Austria, The Netherlands, Belgium, Italy, and Albania, concluded in the early morning hours of Sunday, July 26, 2020.

Mrs. Maryam Rajavi, the President-elect of the NCRI, addressed the session on its final day, which coincided with the beginning of the 40th anniversary of the NCRI's founding.

Fifty NCRI members, Committee chairs, representatives in different countries and member organizations, Iran’s national sports champions and prominent artists discussed the NCRI’s activities, the Iranian regime’s crisis-riddled situation, the prospects for its overthrow, the NCRI's 40-year history, its steadfastness and political demarcations in one of the most critical eras of Iranian history.

In addition to NCRI members, some 82 observers and allies also took part in the session, with a number of them providing their remarks.

Mrs. Rajavi stressed that the NCRI has been the highest-ranking and the most effective opposition to the mullahs’ religious dictatorship; it has made the greatest sacrifices and has suffered the most while waging a relentless battle. The NCRI is now advancing with all its might toward the regime’s overthrow and the establishment of democracy and the sovereignty of a popular republic, she added.

While scanning through the NCRI’s history, Mrs. Rajavi said that the trajectory of developments over the past 40 years confirms the veracity of the NCRI’s core principles and viewpoints. The NCRI declared from the very beginning that the ruling theocracy is incapable of moderating itself or carrying out reforms or to even negotiate. It is also incompatible with peace. This regime will neither become ‘moderate,’ nor will it be able to ‘rebuild’ the country or abandon its export of terrorism and fundamentalism.

The NCRI President-elect said: Thirty years ago when virtually nobody had any information about the regime’s nuclear projects, the NCRI launched its extensive attempts to expose those projects and championed a non-nuclear Iran. At all junctures, it exposed the shameful policy of appeasing the ruling religious fascism, it spoke out against the mullahs' attempts to auction off the country by signing treacherous accords, and it defended the national interests of the Iranian people everywhere.

Mrs. Rajavi added: The NCRI has pledged not to seek power but to transfer power to the people of Iran. Based on the plans adopted by the National Council of Resistance of Iran, the Provisional Government established after the mullahs' overthrow must hold free elections to form the National Constituent and Legislative Assembly within a maximum period of six months. As far as the Provisional Government is concerned, its mandate of transferring power to the people will end as soon as the National Constituent and Legislative Assembly is formed.

Mrs. Rajavi referred to the NCRI’ Plan on the Provisional Government’s Relations with Religion, adopted in November 1985, and highlighted the fact that this Plan denounces all religious compulsion or forcing people to practice religion. It further rejects all forms of “discriminations as well as any political or social privileges and coercion” in relation to Islam. The Plan stipulates that “under no circumstance is any religion or denomination recognized as enjoying special privileges or rights” while at the same time respecting “the freedom of religions and faiths.”

The NCRI President-elect emphasized that the NCRI has refrained from adopting a parochial outlook or from insisting merely on its own positions, platform, or adopted plans, and instead it has repeatedly called for the formation of a National Solidarity Front to overthrow the mullahs’ religious dictatorship. The NCRI, Mrs. Rajavi added, has declared that it is prepared to cooperate with all forces who seek to establish a republic and a democratic, independent political system based on the separation of religion and state, provided that they pledge to reject the mullahs’ religious dictatorship in its entirety, with all its internal factions.

During the session, NCRI members debated developments in various spheres in Iran, especially those following the November 2019 uprising.

Members also talked about the Free Iran Global Summit on July 17-21, which linked 30,000 locations in more than 100 countries, and which saw the participation of more than 1,000 political dignitaries from around the world. In their debates, NCRI members assessed the Summit's consequences as well as its impact inside Iran and on the international stage.

When it comes to the coronavirus crisis in Iran, the Iranian Resistance has rightly declared that (the mullahs’ supreme leader, Ali) Khamenei and (the regime’s president, Hassan) Rouhani have adopted a policy of causing mass human casualties to fend off popular uprisings and the threat of being overthrown. They find the coronavirus spread as a gift and an opportunity, as well as an "ally" that acts against our people and is a savior for the regime.

Due to pandemic-related international restrictions, the three-day Free Iran Global Summit was held virtually, and in their discussions, NCRI members described it as a significant undertaking in the realm of communications amid COVID-19 protocols. The Summit reflected the Iranian Resistance’s extraordinary capability as it firmly stands against Khamenei’s strategy of taking advantage of the “opportunity” provided by the coronavirus.

The NCRI continually provided credible facts and figures about the catastrophic dimensions of the coronavirus spread in Iran, including facts contained in internal documents and communications within the regime, thereby preventing the mullahs from completely suppressing the Iranian society through the strategy of mass human casualties.

The NCRI plenary session also addressed pertinent international and regional developments, in particular the setbacks suffered by the regime in the context of its strategy of meddling in Syria, Iraq, and Lebanon. The session noted that the elimination of the regime's terrorist Qods Force commander Qassem Soleimani dealt an irreparable blow to the mullahs' suppression and export of terrorism, which in turn has drastically demoralized the Islamic Revolutionary Guard Corps (IRGC).

Secretariat of the National Council of Resistance of Iran (NCRI)
July 29, 2020