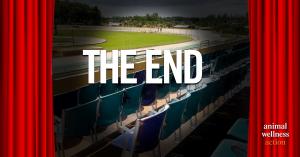 Our new investigation of greyhound breeding farms shows that dog racing is cruel from start to finish.”
— Christine A. Dorchak, president and general counsel of GREY2K USA

“Greyhound racing will soon end in the United States, and this bill allows for a managed phase-out of the activity to enable planning to provide homes for the dogs and certainty for the owners, workers, and breeders in the industry,” said Wayne Pacelle, president of Animal Wellness Action. “Greyhound racing is dying, and it’s best to manage the shutdown of the industry to allow for a soft landing for the people and the animals involved.”

Cardenas’ bill comes in the wake of a startling investigation by GREY2K USA that exposed live lure training in Oklahoma, Kansas, and Texas, with “farms” training dogs by allowing them to tear apart rabbits to accustom them to chasing the mechanical lure used for racing. Some states have long-standing prohibitions on the use of live lures, and industry leaders have denied for decades that the practice exists.

During the course of an investigation that spanned nearly a year, greyhound protection group GREY2K USA documented illegal greyhound training at breeding farms in three states, including at a property that is only two miles from the National Greyhound Association headquarters in Abilene, Kansas. More than one hundred dogs that were bred or trained at these live lure facilities are currently racing at commercial racetracks, including thirty-seven greyhounds that are racing in Arkansas, twenty-five greyhounds that are racing in West Virginia, and twenty-four dogs that are racing in Florida. The details of this investigation and all relevant footage have been provided to law enforcement officials and racing regulators in Arkansas, Florida, Iowa, Kansas, Oklahoma, Texas, and West Virginia.

“Our new investigation of greyhound breeding farms shows that dog racing is cruel from start to finish,” noted Christine A. Dorchak, president and general counsel of GREY2K USA. “This is an antiquated industry with a compulsion for cruelty.”

The bill also comes after a series of track closure announcements in the United States.

Those announcements came not long after Florida voters approved Amendment 13, which banned all live racing in the state by the end of this year. Floridians approved the measure with well more than a two-to-one margin in the industry’s hub. Just prior to the launch of the ballot measure campaign – led by Grey2K USA and Animal Wellness Action, and former Florida Attorney General Pam Bondi – Florida had 12 of the 18 operating tracks in the United States.

“Greyhound racing is cruel and must end,” said Congressman Tony Cárdenas. “These docile animals are kept in stacked cages for 20 hours or more a day and are subjected to brutal training practices and races, facing the risk of injury and death at every turn. My bill allows for a sensible wind-down of an already-declining industry that will ultimately outlaw greyhound racing. As a longtime animal welfare advocate, I am committed to always speaking up for the voiceless.”

Today, outside of Florida, only four tracks operate, and the only two without a definite timeline to end live racing are in West Virginia. The tracks, based in Charleston and Wheeling, are owned by Delaware North, a privately held company based in Buffalo and built around gambling and food service. A generation ago, there were 60 tracks in the United States, so the decline of racing has been precipitous. Delaware North is the owner of the Southland track in Arkansas and helped to negotiate the end of racing there.

Dogs used for racing are kept confined in stacked metal cages for up to 23 hours a day. When let out to race, they suffer serious injuries including broken legs and backs, crushed skulls, and paralysis. State records also show greyhounds testing for serious drugs, including cocaine and anabolic steroids. Greyhound racing survived for as long as it has only because of state subsidies that enabled them to operate. At the few tracks that remain, the dogs perform in front of nearly empty bleachers. With so few states operating tracks, animal welfare concerns will become even more pressing because of threadbare operations that will have even less ability to care for the dogs.

The federal government has authority on this subject because dogs are bred and transported across state lines for racing and races are broadcast to numerous states for simulcast gambling. The bill amends the Wire Act to achieve its purposes of ending greyhound racing and live-lure training.

The legislation is also endorsed by the Animal Wellness Foundation and the Center for a Humane Economy.

Formed in 2001, GREY2K USA Worldwide is the largest greyhound protection organization in the United States with more than 250,000 supporters. As a non-profit organization, the group promotes the adoption of ex-racers and works to pass laws to end the cruelty of dog racing around the world. For more information, go to www.GREY2KUSA.org or visit GREY2K USA on Facebook or Twitter.