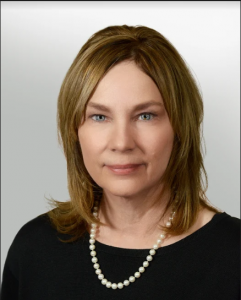 Author of More Than One Storm Coming 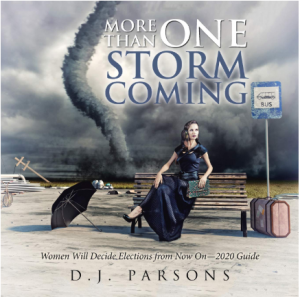 A silent Church missed the coming of the lawless leader they were all looking for. "Once again the people chose Barabbas. Once again money changers must be driven from the Temple.”
— D.J. Parsons

UNITED STATES, July 28, 2020 /EINPresswire.com/ — The world goes forward one way or another, whether glacially or in paradigm shifts. According Denise Parsons, there is "More Than One Storm Coming" and with such changes arise the need for a new kind of man and woman. In these times, nothing is certain. Parsons describes a hectic world where there is no normal and anything goes, where an unequal society’s greed is damaging the planet and their mistreatment of women has reached a boiling point. So that is why with her book she outlines a shining path to a better state of affairs, a Reformation to recreate a Church and Christendom that is for women and for the world.

From time to time the world turns upside down as a deluge of change upends everything and creates a new order. Civilization eventually went from the Stone Age to the Dark and Middle Ages. From the Renaissance to, centuries later, the Wild West. And from the Industrial Era to Big Data today. With "More Than One Storm Coming," Parsons delves into how despite an increasingly interconnected world women and children continue to be mistreated. She describes the toll patriarchy takes on societies as modern power structures, still rooted in tribalism and insatiable greed, carve up the Earth's resources while waging countless wars. The Earth is being ruined, nations are gambling away their citizens' money… and it is all being documented in real time
courtesy of social media. Now civilization is on the brink of depression and plague, so she asks what should the next move be?

"A silent Church missed the coming of the lawless leader they were all looking for," Parsons alludes. "Once again the people chose Barabbas. Once again money changers must be driven from the Temple."

She explains that her book is about how women are exhausted existentially. And how they have to save the world. Parsons explains that patriarchal authorities and power structures, which have been calling the shots since time immemorial, cannot cut it anymore.

"The book is about what's going on with biology and why women must make their own money for the survival of their young in this New Age, whatever we decide to call it." Parsons adds. Insightful, introspective, equally imbued with Christian theological philosophy and doomsday prepper urgency, Parsons’ warnings of “More Than One Storm Coming” will certainly make readers take a second look at the current world order. She challenges them to imagine a different way of doing things, another way of living, not only on an individual and microscopic scale but on a collective level involving the power structures governing the course of our lives. Things can change for the better, as it has across human history. By pointing out that there is “More Than
One Storm Coming,” Parsons ultimately lights a beacon of hope for women, children and all humanity caught within the cage of patriarchy.

Denise Parsons spent her youth in the fashion industry and her mature years informing young women of the perils ahead. She describes her journey as beginning in 2009 when she heard a TV evangelist condemn women who went through the misfortune of abortion. Raised in an environment where religion was based on forgiveness and man's righteousness is as rags, this boiled her blood. Now at age 65, after having studied men for half a century, she strives to right the wrongs before her, saying that this time around the inability of men to ask for directions has landed the world in a real mess.