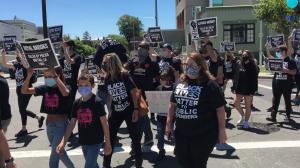 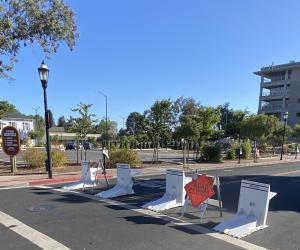 Archer 1200 Vehicle Barriers Deployed for the Protection of Peaceful Protestors

By having the Meridian barriers at every key entry point around the city we were able to quickly and effectively close down vehicle traffic.”
— Martinez Police Department Lt. Mike Estanol

Nearly a thousand people gathered in downtown Martinez, CA for a Black Lives Matter demonstration and march beginning at the site where a couple painted over a city-sanctioned Black Lives Matter mural. The defacement occurred on July 4th and infuriated residents.

On short notice Meridian, through its partnership with TriCal Rentals of San Francisco, arrived with 36 Archer 1200 mobile barriers and locked down the entire route of the march. The plan created a solid “no go zone” for vehicles attempting to enter the area and therefore ensured the safety of the large crowd.

Mike Estanol from the Martinez Police Department said, “By having the Meridian barriers at every key entry point around the city we were able to quickly and effectively close down vehicle traffic. It created a large safe zone for our residents taking part in the demonstration. I liked the barriers because people could move freely past them while still stopping cars and trucks.”

The Archer barriers guarded against any driver trying to get into the center of the city for the wrong reasons. During the gathering protestors peacefully took a knee for eight minutes and 46 seconds, marking the time the Minneapolis Police Officer was kneeling on George Floyd's neck before he died.

“We were called at the last moment when authorities in Martinez realized the march was attracting many more people than they originally planned for,” said Peter Whitford, CEO of Meridian. “Along with our partner TriCal, we rushed the mobile Archer barriers to Martinez and within the hour on Sunday morning had the streets locked down.”

During the riots in Los Angeles recently Meridian’s barriers played a similar role at The Grove shopping and lifestyle center. More recently Archer 1200 barriers are being used to protect outdoor diners by creating “safe streets” around the U.S.