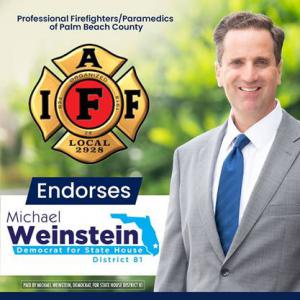 “The Palm Beach County Police Benevolent Association, Inc. is proud to inform you of its endorsement of your candidacy for State Representative 81,” stated John Kazanjian, president of Palm Beach County PBA. “We will ask our members, their friends and families to cast their ballots in support of Michael Weinstein.”

“Your advocacy for, and understanding of, public safety issues is commendable. You have demonstrated that you can lead and that you are not afraid to do so. The residents of the State of Florida are fortunate to have someone like you who is working tirelessly for their interests. It is without question that the Professional Firefighters/Paramedics of Palm Beach County support you in your election campaign,” stated in the Professional Firefighters and Paramedics of Palm Beach County endorsement letter.

“Public safety continues to be a paramount issue in our community and across Florida. With COVID-19 cases going up, now more than ever, we need leadership that focuses on the safety of our community,” Michael Weinstein stated.

“As a prosecutor, father and community advocate, I know what it takes to keep people safe and stand up for justice. I’m proud to have the endorsement of both the Palm Beach County Police Benevolent Association and the Professional Firefighters and Paramedics of Palm Beach County. I will work hard to build bridges between our first responders and the community while ensuring they have the resources they need to keep us safe,” Michael Weinstein stated.
As State Representative, Michael will fight every day to ensure District 81 has a voice that reflects community values. He will get things done, pass meaningful legislation, and bring home results for families, children, and businesses.

Michael Weinstein is a life-long Democrat who has spent his entire career as an advocate for justice. Michael served our community as an Assistant State Attorney, where he was recognized as one of the county’s top prosecutors in 2001. He served 3 terms on the Florida Criminal Procedure Rules Committee drafting court rules and procedures to be used across the state and was appointed to the United States Military Academy Board Nominating Committee by Senator Nelson.

Raised by generations of Democratic leaders, Michael learned at an early age the importance of public service and having the courage to stand up for what you believe in. Michael’s grandfather Moses Weinstein served as Speaker of the New York State Assembly, and his father Peter Weinstein was the Florida Democratic Senate Majority Leader and a former Chief Judge. His mother, Dr. Barbara Weinstein, served as CEO of Family Central, a non-profit that works to support kids and families across South Florida.

House District 81 is an open seat. Michael and his wife are raising their nine-year-old daughter in the district. He is the only candidate in the Democratic Primary who lives in the District. The election is on Tuesday, August 18th.

To learn more about Michael, please visit Weinstein for State House and connect with him on Facebook.