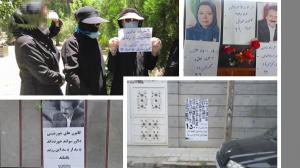 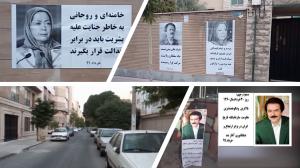 Tehran- “Maryam Rajavi Khamenei and Rouhani must be held accountable for crimes against humanity”- June , 2020 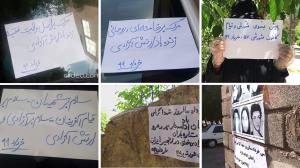 Tehran – A Resistance Unit calls for “protest and uprising”- June, 2020 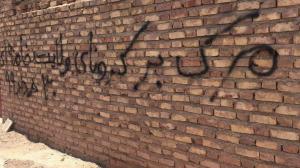 Kerman- “Down with the Mullah’s rule, worse than the Coronavirus”- June, 2020 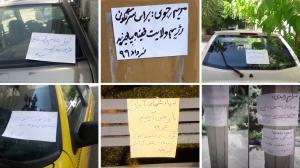 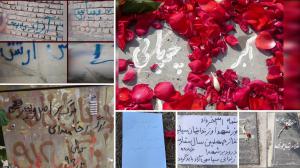 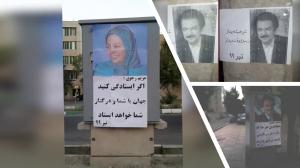 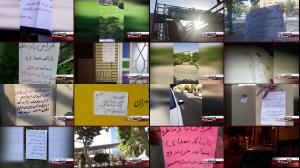 Activities of the Resistance Units and supporters of the MEK in various cities- June , 2020

“Massoud Rajavi On June 20, 1981, we upheld the banner of resistance.” “We will not rest until Iran is free, down with Khamenei.”

These widespread activities were undertaken despite extensive security measures by the regime’s repressive forces.”
— NCRI

During the past week, Resistance Units and supporters of the People's Mojahedin Organization of Iran (PMOI/MEK) marked June 20, 1981, the beginning of the Iranian people's Resistance against the ruling religious dictatorship, and the day of martyrs and political prisoners.

These widespread activities were undertaken despite extensive security measures by the regime’s repressive forces. By their actions, they spread the indisputable message of freedom, democracy, and imminent regime’s downfall.

The Resistance Units and MEK supporters installed banners and messages of the Iranian resistance leaders, Mrs. Maryam Rajavi, the President-elect of the National Council of Resistance of Iran (NCRI), and Massoud Rajavi, the leader of Iranian Resistance, which, pointed to protests and uprisings as the only solution to achieve freedom and democracy in Iran. They also distributed leaflets, wrote slogans, and posted pictures of MEK members fallen for freedom, which paid homage to the Day of Martyrs and Political Prisoners and echoing their messages that the regime will be overthrown. MEK activists also laid wreath on the graves of those martyrs in various cities.

Among the slogans were "Maryam Rajavi: June 20, is the turning point in the historic resistance for freedom and democracy and against Iran’s religious dictatorship,” "Maryam Rajavi: Let’s remember 1,500 fallen victims during November 2019 uprising," "Marking June 20, the day of the martyrs and political prisoners," "June 20 marks the day of the martyrs, your path continues," "Khamenei's headquarters is the source of all diseases, terrorism, torture, looting and corruption," “We can and we must overthrow the velayat-e faqih regime (religious dictatorship),” "Down with Khamenei, Rouhani, Long live the Liberation Army," "Hail the martyrs, to rebellions, to freedom fighters and to the army of freedom." "Long live the memory of the martyrs of last November’s uprising,” "Hail to those who stood up to the dictatorship and did not surrender," "Massoud Rajavi: From June 20, 1981, until today, Resistance was waged for the freedom of our people and our homeland," "Down with Khamenei, hail to Rajavi," "Democracy, freedom with Maryam Rajavi.”

Secretariat of the National Council of Resistance of Iran (NCRI)
June 30, 2020

Video: Activities of the Resistance Units & MEK/PMOI supporters across Iran in Commemoration of the June 20 Anniversary