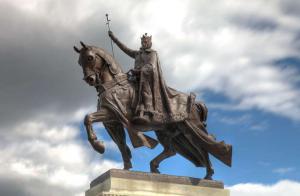 WASHINGTON, DC, USA, June 30, 2020 /EINPresswire.com/ — The Middle East Christian Committee (MECHRIC) is alarmed at the wanton destruction of the symbols of Christianity in America and points to the danger posed by the aggressive actions of the Council on American Islamic Relations (CAIR), a Muslim Brotherhood front group, which apparently is seeking the destruction of historical Christian symbols including the statue of Saint Louis in Missouri.

On June 27, Umar Lee, a self described Salafi Islamist organizer of the protests, said that the statue "is gonna come down," as reported byJoel Currier of the St. Louis Post-Dispatch. "This guy right here represents hate (…) We're trying to create a city where Black lives matter (…) where there is no Islamophobia … this is not a symbol of our city in 2020."

Moreover, Moji Siddiqi a member of CAIR seeking to topple St Louis statue said, "It's a revolution (…) our number one mission is to take this thing down."

Saint Louis, a French Saint and King, died in 1270 AD/CE, hundreds of years before the discovery and settlement of America by the Europeans. He is a Catholic Saint and revered by a billion Christians worldwide, including Africans, Middle Eastern and Asians. His symbolism has nothing to do with America's history. CAIR's Ikhwan agenda seems to want to destroy a symbol of medieval confrontation between Crusaders and the Caliphate. Like the Taliban totalitarian ideology, this drive to destroy religious symbols of Christians, moderate Muslims and Jews, is unacceptable and dangerous. This is a call to a religious conflict made in the midst of a civil rights protest.

American and Mideast American Christians reject CAIR's fundamentalist agenda and its abuse and manipulation of the Black Lives Matter protests and call on this organization to stop their aggression against global Christian symbols. MECHRIC also calls on American Christians and Muslim moderates to rally around these revered symbols and protect them peacefully across the nation. Millions of Catholics and other Christians will not accept this Jihadi agenda for the eradication of historic religious symbols.

CAIR is a member of the Action Network and the Regional Muslim Action Network, which organized protests to remove the statue of Saint Louis as well as to rename name the city itself. Several statues of St. Junipero Serra have been pulled down and vandalized in San Francisco and other California cities by radicals.

"CAIR is acting to incite and inflame tensions in America," said MECHRIC executive board member John Hajjar. "They are clearly using the Black Lives Matter movement to advance their own anti-Christian and anti-American agenda."

"We Christians, who come from the Middle East, know persecution and oppression in a way most Americans cannot understand," added Tom Harb, Chairman of the American Maronite Union. "The fact that CAIR is joining with neo-Bolsheviks to destroy symbols of American Christian culture is a dangerous development. We do not want to see Christian persecution come to America, but that is what is happening before our eyes."

The neo-Bolshevik far-Leftists and radical Islamists both seek to weaken and destroy the United States. Christians and moderate Americans from all faiths must unite to resist their relentless attacks. MECHRIC calls for all Christians to begin mobilizing to defend our faith symbols from the forces of anarchy, intolerance, and destruction.