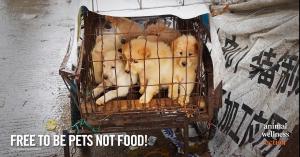 The dog meat trade in China and other nations has triggered investigations, protest, and outrage even within nations where this industry operates.”
— Wayne Pacelle, President of Animal Wellness Action

WASHINGTON, DISTRICT OF COLUMBIA, UNITED STATES, May 30, 2020 /EINPresswire.com/ — In what can only be described as one of the biggest contemporary gains for animals globally, China has removed dogs from its National Catalogue of Livestock and Poultry, clearing the way for the shutdown of dog meat sales, including dog meat festivals such as the infamous one conducted in Yulin. Dogs in China have long been raised and collected by the millions annually and butchered for human consumption, and this new policy is a prescription for ending the entire trade. Only a minority of Chinese consume dog meat, and the younger generation by and large steers clear of it.

The proposed national policy was elucidated in April, just months after the COVID-19 crisis started in Wuhan. “With the progress of human civilization and the public’s concern and preference for animal protection, dogs have been ‘specialized’ from traditional domestic animals to companion animals,” wrote a spokesperson from the Ministry of Agriculture and Rural Affairs in April in the original expression of the proposed policy change.”

“The dog meat trade in China and other nations has triggered investigations, protest, and outrage even within nations where this industry operates,” noted Wayne Pacelle, President of Animal Wellness Action. “As pet keeping continued to rise and became the dominant form of interacting with dogs, the dog meat industry was a contradictory behavior that could endure for long. The COVID-19 was a catalyst for the evolution in social thinking about dogs.

Animals Asia, which has been on the ground in China fighting for animals for over 30 years, sent this dispatch to Animal Wellness Action: “Although the legislation is not an outright ban on consumption, the regulation bans the selling of live dogs and dog meat for food. This means all the dog restaurants, markets and slaughterhouses countrywide selling dogs for food are now illegal, sending a message to the industry that dog meat consumption is not supported by the government. The protection also extends to cats.”

The decision follows actions earlier this year by the cities of Shenzhen and Zhuhai to ban the eating of dogs and cats. It also comes more than a year after the United States banned the trade domestically, partly as a signal of moral leadership sent to China. AWA helped lead the fight to pass that law in Congress.

“We expect this decision to end the horrific treatment of millions of dogs who are terrorized, slaughtered, and skinned as part of the meat trade in China each year,” said Jennifer Skiff, Director of International Programs for Animal Wellness Action. “But be assured, the battle is far from over. The ability to enforce is always an issue once a law is created – and that’s not China specific. Still, this action is far-reaching and those who follow the law will walk away from the trade and their action will create monumental change.”

Skiff, who last year spoke to animal advocates in Beijing about the trade and the global movement to end it, said, “Today is a day to rejoice for the good people of China who have been desperate to see this change. Sadly, investigative reports by Animals Asia have shown that the majority of dogs in the trade are stolen companion animals. This is just the beginning of the end of the trade.”

“The COVID-19 crisis exposed live animal markets as barbaric and as serious threats to public health, and the government of China acted responsibility by ordering its closure,” said Odessa Gunn, Northern California Director for Animal Wellness Action and an investigator who been to dozens of dog meat markets in China and told the story of the callous and horrifying treatment of the animals. “It’s a celebratory moment for the people of China and for people throughout the world and with the possible shutdown of live wildlife sales for food, it heralds a new era in the treatment of animals in China.”

Dogs are still farmed in South Korea and eaten in other Southeast Asian countries. It’s hoped China’s decision will be followed by its neighbors, whose authorities sanction the farming and tolerate theft of pets and collection of animals for the trade. The stories of those dogs, along with the photos of them stuffed into wire cages, and on trucks heading to China have fueled the global movement that can claim part of this week’s decision by China to stop the sale of dogs for food.