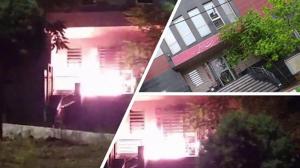 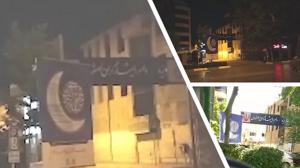 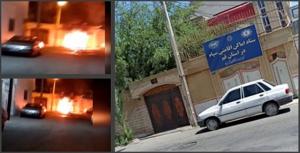 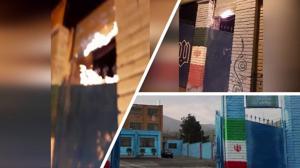 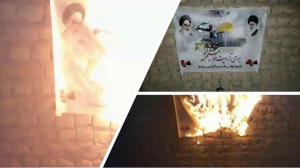 By setting alight the entrances of these centers, the defiant youth echo the abhorrence of the Iranian people over 40 years of suppression and inhuman policies of the dictatorship ruling Iran.”
— NCRI

PARIS, FRANCE, May 27, 2020 /EINPresswire.com/ — Despite the clerical regime’s heightened repressive measures and desperate efforts and the launch of a wave of blind arrests in various cities, defiant youths have targeted several centers of repression and plunder in Tehran and other cities over the past week.

By setting alight the entrances of these centers, the defiant youth echo the anger and abhorrence of the Iranian people over 40 years of suppression and inhuman policies of the religious dictatorship ruling Iran.

On Monday, May 25, 2020, the center for the export of extremism and Terrorism in Qom, supervised by Ali Khamenei’s office, was targeted by the defiant youth. At the same time, the repressive Basij Center in Kermanshah and Goldasht-Karaj were set on fire.

In Isfahan, the center of plunder, the so-called “Martyr’s Foundation,” and IRGC’s mobilization center involved in suppressing the uprisings were targeted by the defiant youth.

In Qom, the Headquarters for IRGC Sites was targeted. In Karaj, defiant youth torched the sign at the entrance of the repressive Basij center, responsible for suppressing university students. In Tehran, the billboard of the center for terrorism recruitment and training, as well as in Sonqor and Kolyāei (Kermanshah Province), were targeted and set on fire.

In the past week, defiant youths have also set fire the pictures of the regime’s supreme leader, Ali Khamenei, as well as the banners of Qassem Soleimani, the eliminated commander of the terrorist Quds force, in various cities, including Arak and Karaj.

Secretariat of the National Council of Resistance of Iran (NCRI)
May 27, 2020

Iran: Defiant youth target centers of plunder and repression in Tehran and other cities