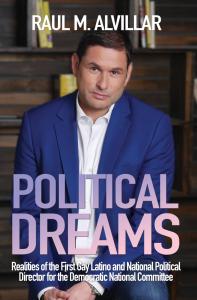 I never in my wildest dreams thought that the book would become a bestseller. I hope that people find the book inspiring and get a glimpse of how politics can change lives and change the world”
— Raul Alvillar

WASHINGTON D.C., UNITED STATES, May 27, 2020 /EINPresswire.com/ — Senior Political Strategist Raul Alvillar secured best seller status in two categories on Amazon for the pre-order of his personal chronicle of his life in politics: POLITICAL DREAMS – REALITIES AND REFLECTIONS FROM THE FIRST GAY LATINO NATIONAL POLITICAL DIRECTOR FOR THE DEMOCRATIC NATIONAL COMMITTEE.

The book offers an inside glimpse into the high stakes world of politics on the national stage is available now to pre-order on Amazon for digital download.

“ My career has been informed by some of the brightest minds in the political world, from past presidents to community organizers, and I am excited at the opportunity to share some of that knowledge”

With over two decades of experience in political affairs and strategic planning, Alvillar has guided numerous Fortune 100 and 500 companies. As the National Political Director at the Democratic National Committee (DNC), Alvillar led political strategy and managed the DNC’s relationships at the national, state and local level. Prior to the DNC, Alvillar served in several roles for President Barack Obama including Associate Director of the White House’s Office of Public Engagement. In this role, he facilitated White House interactions with policy influencers so they could articulate the President’s message to mass audiences. As the interim LBGT Liaison he managed the White House rollout of the “Don’t Ask, Don’t Tell” repeal. He currently sits on the Uber Diversity Council to help add communities of color to their work force at the senior level.

Alvillar was named to the Huffington Post’s list of 40 under 40 most influential Latino’s in American Politics in 2014 and 2015. He has been a guest commentator on numerous national TV shows including Fox News, Fox Business, CNN, CNN Espanol, and has been featured in the New York Times and USA Today to name a few. Raul is an in-demand speaker and is currently part of the Joe Biden Campaign as an advisor on the LGBTQ+ Kitchen Cabinet. He also currently sits on the Uber Diversity Council to help add communities of color to their work force at the senior level.
The book is published by Live Your Dreams Out Loud Media. It is expected to release in July 2020. To order your copy today, please visit Amazon.