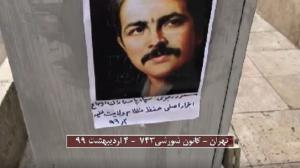 Tehran April, 2020- the IRGC is the key to keeping the religious dictatorship in power 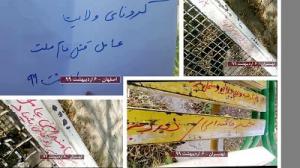 Various cities- The velayat-e faqih is the prime cause of death in the country – April, 2020 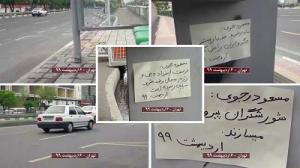 Tehran- Time is running out for the religious dictatorship – April, 2020 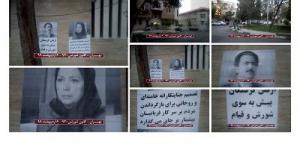 Tabriz- The army of the hungry, onward to uprising and rebellion – April, 2020

Freedom, health, and the livelihood of the people, the salvation of the economy, and the preservation of Iran's existence depends on the overthrow of the regime

Among the slogans was: "The army of the hungry onward to uprising and rebellion,"”
— PMOI/ MEK Network inside Iran

PARIS, FRANCE, April 30, 2020 /EINPresswire.com/ — In recent days, the Resistance Units and the youth supporters of the Mujahedin-e Khalq (PMOI / MEK) posted banners of, and messages of solidarity with the Corona-stricken people of Iran, by Mrs. Maryam Rajavi, the President-elect of the National Council of Resistance of Iran (NCRI), and the Iranian Resistance's leader, Mr. Massoud Rajavi, in the capital, Tehran, and many other cities, including Shiraz, Torbat Heydariyeh, Hamedan, Lahijan, Kerman, Rafsanjan, and Isfahan. They also wrote graffiti and slogans in various locations across the country.

Among these slogans were: "The army of the hungry onward to uprising and rebellion," "As long as the criminal and warmongering IRGC forces exist, the religious dictatorship will continue, Long live freedom," "Stepping up protests is the key to victory," Massoud Rajavi: "We should rise and protest a hundred times more to take Iran back,” "This is the choice of the valiant sons of Iran – Khamenei and his rule must be overthrown," Maryam Rajavi: "The criminal decision by Khamenei and Rouhani to force the people back to work will leave behind countless lives,” "As long as the criminal and warmongering IRGC remains, the clerical regime and the velayat-e-faqih will continue," "There is only one solution and only one solution to overcome Coronavirus, poverty, repression, and dictatorship: overthrowing the entirety of the velayat-e-faqih rule in Iran,” "Not only freedom but also the health, livelihood of the people, and the salvation of the economy as well as the preservation of Iran's existence depends on the overthrow of the regime."

It is worth mentioning that these activities are carried out while the IRGC and other repressive forces are on high alert.

Secretariat of the National Council of Resistance of Iran
April 27, 2020