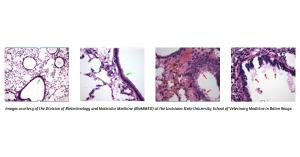 The most promising treatment for COVID-19 can be found in the files of FDA’s Center for Devices and Radiological Health (CDRH) and the National Institute of Health. I know that because in 2006 during the fear of an H5N1 (bird flu) pandemic the FDA asked if my company would work with them to determine if a therapy we were perfecting would be a safe and effective treatment for H5N1.I invite you to view the simple 20-minute process of UBI on our website globalpandemicconsortium.com.

FDA’s interest in our technology was based in part on the results of our research that they reviewed and approved as follows:
1. An in-the lab study of SARS resulted in near complete inactivation of the virus after just 10-seconds of exposure

2. A study of rhesus monkeys infected with SIV conducted at one of the seven national primate centers (TNPC) established dramatic reductions in viral loads, causing the researchers to opine that the results were “unprecedented”.

3. A phase I study reviewed and approved by the FDA of human patients infected with the hepatitis C virus established significant reductions in viral load of 50-80%, and a second study established similar reductions while some patients experienced an improvement in liver function.

4. Based in part on the results above and additional safety studies in June of 2008, FDA granted us approval to conduct the first study ever of a non-drug treatment for humans infected with HIV.
Due to the high cost of H5N1 research at the time, we worked with FDA and designed a two-phase program. The first phase of the research was conducted in 60 mice infected with H1N1 and separated into 2 groups. One group (30 mice) were treated with the therapy while the remaining mice received a sham treatment. The results of that research are summarized as follows:

• A critical parameter in respiratory infections is a patient’s ability to breathe. As measured by pulmonary function testing, infected animals that were treated exhibited a significantly greater ability to breathe relative to their sham-treated counterparts.

• The inability to breathe in influenza-infected individuals is generally associated with cellular inflammation in the airways of the lung that obstructs these passageways. Pathological examination of lungs clearly indicated that the treatment significantly inhibited virus-induced inflammation, resulting in airways that were, for the most part, clear of inflammatory cells and cellular debris (green arrows). In contrast, the lungs of the sham-treated mice had airways that were filled with inflammatory cells and blood and exhibited substantial destruction of the cells lining them (red arrows).

• The experimental treatment appears to modulate specific arms of the immune response, thereby limiting the scope and severity of clinical and pulmonary disease normally associated with the body’s response to influenza infection. This has important implications in that the therapy may be effective irrespective of the virus’s antigenic subtype or susceptibility to antiviral medications.

The last finding is the most interesting, as it suggests that the treatment could be effective against any pandemic virus regardless of its name or strain.

A meeting with representatives of the National Institutes of Health (NIH) was held to discuss funding for the additional research and determine their interest in preparing the devices that would be needed to rapidly respond to a pandemic. Although NIH agreed with FDA that the results were very promising, the bird flu threat had waned, as did their interest in preparing for it or any yet identified pandemic and the research was suspended.

Although now retired, the potential of a significant loss of life due to the COVID-19 pandemic has caused me to resurrect the considerable research we were conducting. In that regard, I have been in communication with officials at CDRH to discuss a study that has been designed by researchers at one of the seven national primate centers.

As you are aware the regulations for reviewing and clearing medical devices are less rigorous than those for drugs and other pharmacological therapies. Specifically, FDA regulation 510K allows for a 90-day clearance for a device that can be shown to be substantially equivalent to a device that was commercially available prior to December 1976. Although we believe our technology would be a candidate for such a clearance, in the event FDA disagrees, we are committed to working with them to obtain the clearance expeditiously.

The potential benefits of the technology / treatment are numerous……

Safety – it should prove to be safe as it has been administered hundreds of times without an adverse event.

Effectiveness – research has established its ability to inactivate RNA type viruses such as COVID-19 as well an ability to treat respiratory conditions such as pneumonia, a serious complication of COVID-19.

Rapid and ease of administration: The device is the size and weight of a brief case allowing for the treatment to be administered in the comfort of a patient’s home in a matter of 20 minutes.

Multipurpose: There is a high likelihood if proven to reduce viral load in COVID-19 patients it will reduce the virus of the next pandemic and the one after that.

Mr. President, we applaud you for your interest and efforts to pull out all stops to find the
‘game changer” to treat COVID-19. I believe this therapy is a critical piece of the solution everyone is searching for and hope there is a way for us to partner with the federal government to expedite the testing, manufacture and distribution of the therapy to the healthcare providers that can utilize it.

Thank you for all you are doing to end this terrifying pandemic and for your time and interest in this important matter.