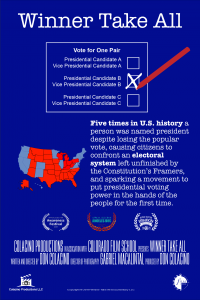 “Winner Take All,” a film about the U.S. electoral system, was named “official selection” of the Emerging Filmmakers Project 2020 festival

As adopted by 15 states and the District of Columbia and under ongoing consideration by Virginia’s legislature, the compact fully preserves the Electoral College.”
— Michael Steele, Former chairman of the Republican National Committee

DENVER, COLORADO, USA, February 28, 2020 /EINPresswire.com/ — Denver, Colo., February 28, 2020 / EINPresswire.com / — Colacino Productions LLC, in association with Winner Take All Documentary LLC is pleased to announce that the documentary film, “Winner Take All,” (winnertakeallfilm.com) has been named an “official selection” of the 2020 EFPalooza Film Festival (http://www.efpdenver.com/2020-efpalooza-film-festival/, https://www.facebook.com/events/229202978128408/). The event is a three-day film festival celebrating the best of the Emerging Filmmaker’s Project, the home of Denver’s independent film scene since 2002. This year’s event will be held March 19th, 20th and 21st at Denver’s historic Bug Theatre. “Winner Take All” will screen in the 1:00 p.m. “Saturday Afternoon Shorts” block on March 21st.

“Winner Take All” explains how the frequently misunderstood Electoral College works, why its election results have conflicted with the popular vote, and a national movement afoot to change the way it works through an interstate compact. “As adopted by 15 states and the District of Columbia and under ongoing consideration by Virginia’s legislature, the compact fully preserves the Electoral College,” wrote Michael Steele in a letter published in The Wall Street Journal on February 20, 2020. “The problem isn’t the Electoral College itself” says filmmaker, Don Colacino. “It’s the way states have chosen to allocate votes,” a key concept addressed in the film by Constitutional scholars, legislators, and the founding documents themselves.

With growing interest in the topic, EFPalooza is the third festival to recognize the film in the lead-up to the 2020 election. The League of Women Voters is also screening the film at various voter outreach events in Colorado and Maine and is also available on Prime Video in the U.S. https://www.amazon.com/dp/B081N215SX and the UK https://www.amazon.com.uk/dp/B081N215SX.

For more information please contact info@winnertakeallfilm.com. To learn more about the Emerging Filmmaker’s Project visit the EFP website at www.efpdenver.com and The Bug Theatre’s website at www.bugtheatre.org.