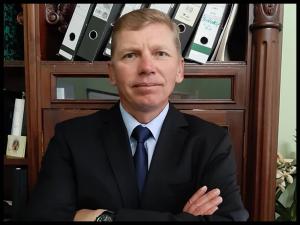 Igor Bitkov’s business was raided in Russia in the mid-2000s. He and his family are currently under house arrest in Guatemala. (Courtesy of the Bitkov Family) 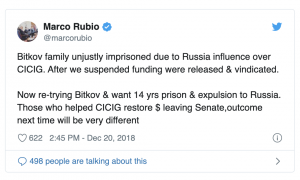 U.S. Senator Marco Rubio and others have spoken out in support of the Bitkov family. (Photo: Twitter)

Igor Bitkov, whose business was raided in Russia in the mid-2000s, is under house arrest in Guatemala. He has joined the center as a co-director.

LONDON, UNITED KINGDOM, February 25, 2020 /EINPresswire.com/ — One of the world’s most high-profile victims of illegal corporate asset grabbing has become co-director of the London-based Center for Business Transparency and Countering Corporate Raids in Russia.

Igor Bitkov, who lost his paper-making companies in St. Petersburg and Kaliningrad, Russia, to a bank-loan scam engineered by ruthless, well-connected business and political figures, is joining center founder Ilgar Hajiyev in spreading the word about illegal asset grabbing, or reiderstvo.

Hajiyev, who lost $50 million of his own to asset grabbing, not only wants to let the world know about the practice, but also help victims recover their losses through court proceedings, diplomacy and other measures.

“Igor Bitkov and his family have endured so much suffering from reiderstvo that the Bitkovs became a symbol of the harm that the practice wreaks on its victims,” Hajiyev said. “I am truly honored that Igor Bitkov is joining in the center’s efforts to counter this scourge.”

Bitkov will become co-director of the center in absentia because he is under house arrest in Guatemala. He, his wife and daughter fled there in 2008 after the loss of their company — North West Timber Company — to the bank-loan scam and after facing assaults, death threats and trumped-up fraud charges in Russia.

The Bitkovs lived under the radar in Guatemala until 2013, when Russian authorities connected to the bank-loan scam figures learned where they were. Although Guatemala refused to extradite them to their homeland, it first sentenced Igor to 19 years in prison and his wife and daughter to 14 years on trumped-up charges, all under coordination from the Kremlin. Later Guatemala placed them under house arrest.

Because the Bitkovs’ persecution has been particularly cruel, and their suffering prolonged, human-rights organizations have taken up their case. In addition, in 2018 various U.S. senators — Marco Rubio of Florida, Roger Wicker of Mississippi, Chris Smith of New Jersey and others — began championing their cause, starting with putting pressure on Guatemala to release them.

Hajiyev became a victim of reiderstvo in the Moscow area in early 2019. What triggered it was a disagreement he had with a partner in late 2018 over the mix of residential versus commercial property in three high-rise complexes that Hajiyev was building and paying for. The partner wanted more commercial property on grounds it would generate more profit.

As the dispute lingered, the partner sent in armed guards to seize the still-under-construction complexes by force, without compensating Hajiyev.

While the partner had arranged for the land and permits for the high-rises, he had put no money into them, so Hajiyev shouldered the entire loss.

Death threats prompted him to flee to Germany, where he was also doing business. There he decided he needed to do something to try to stop reiderstvo. The option he came up with was a center that could unite victims of reiderstvo, publicize the practice and help victims try to recoup their losses.