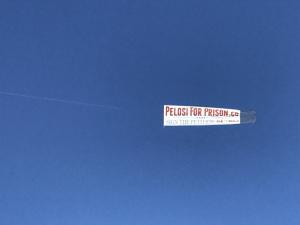 The residents of San Francisco are waking up this morning to find an enormous banner being pulled by a plane that reads “PELOSI FOR PRISON: Sign the Petition.”

I am running for Congress to clean out the corruption that Nancy Pelosi embodies.”
— DeAnna Lorraine

SAN FRANCISCO, CA, USA, February 6, 2020 /EINPresswire.com/ — The morning after President Trump’s acquittal, and in the wake of massive protests from Americans outraged by Nancy Pelosi’s antics at the State of the Union this week, residents of San Francisco awakened this morning to find something shocking in the sky: an enormous banner being pulled by a plane that reads “PELOSI FOR PRISON: Sign the Petition.”

The individual behind the controversial banner is DeAnna Lorraine, the fiery Republican outsider challenging Nancy Pelosi for her Congressional seat in California District 12, which is San Francisco. She has been gaining an immense amount of traction for her campaign both online and on the ground.

The banner directs people to a website, www.PelosiForPrison.co, which displays a list of compelling reasons why Ms. Pelosi should be prosecuted for her “crimes against America.” Then it prompts visitors to “sign the petition.”

The young DeAnna Lorraine is making shockwaves throughout the country with her bold attacks on Ms. Pelosi.
This is an audacious move to have a 25-foot by 80-foot sign with this message flown in the most notoriously liberal city in the country, and right in Ms. Pelosi’s own district. And San Francisco has recently been the subject of intense scrutiny ever since President Trump began shining the spotlight on its exponentially growing homeless epidemic, pollution and drug crisis, and Pelosi’s terrible leadership throughout.

“I am running for Congress to clean out the corruption that Nancy Pelosi embodies,” says DeAnna. “Instead of caring for the people of San Francisco and advancing their issues on a national scale, she spends her time conducting asinine impeachments, petulant theatrical tantrums and ripping apart the President’s State of the Union Speech. It’s past time we start hitting her hard on her record of poor leadership and egregious crimes against America, and I very much look forward to retiring her in November.”

#PelosiForPrison is just getting started.