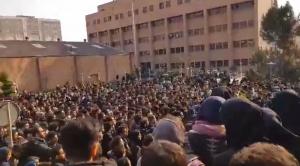 Universities in Tehran were scenes of protests today at noon.

PARIS, FRANCE, January 14, 2020 /EINPresswire.com/ — Students at the University of Tehran department of medicine gathered in protest in front of the university mosque and chanted anti-regime slogans, including "Don't call me a seditionist! You are the sedition, you tyrant!" "Be afraid, be afraid, we are all together," "Command in chief, resign, resign," "The IRGC commits crimes, leader supports it," "Shame, shame on the state TV and radio," "Death to oppressor, whether it be the Shah or the Leader," "1,500 is the death count for November," "Calls for justice from all this injustice," "Death to the principle of velayat-e faqih," "We did not sacrifice just to surrender and praise a murderous leader," "We will die, we will die, and reclaim Iran," and "political prisoners must be freed."

The National University (Beheshti) students protested against an orchestrated gathering of Bassij paramilitary agents, who were brought to the scene as "students." The Bassij agents were forced to flee the scene quickly. Students chanted: "If you are a student, why is your face covered?" "If you are grieving, why did you sit for three days?" "Be afraid, be afraid, we are all together," and "Our enemy is here, they lie that it's America."

Students at the Pardis arts department also staged protests and chanted: "We are empty-handed, put away your batons," and "death to liars."

Mrs. Maryam Rajavi, President-elect of the National Council of Resistance of Iran (NCRI), praised the protesting students, and called on all the people, especially the youth, to support them. She urged the United Nations Secretary-General, the UN Security Council, the European Union, member states, and all international organs supporting human rights to condemn the vicious suppression of protests by the people and students in Iran, to take immediate steps to free detainees, and to send an international delegation to visit prisons and prisoners arrested during the uprising.

Secretariat of the National Council of Resistance of Iran
January 14, 2020