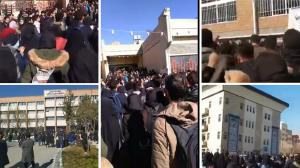 PARIS, FRANCE, January 12, 2020 /EINPresswire.com/ — This afternoon, Sunday, January 12, demonstrations and protests by people and students continued for the second day running in several Iranian cities. Students of National (so-called Beheshti) University were chanting, “Cannons, tanks, and teargas are no longer effective,” “Incompetent IRGC, Source of killing the nation.” In Tehran’s Allameh University, the students were chanting, “We did not give martyrs to compromise and praise the murderous leader.” Students at Tehran University’s School of Management and Khajeh Nassir University chanted similar slogans during their gatherings.

Students at Pardis University in Karaj were chanting, “Be afraid, we are all together.” In Damghan, the students were chanting, “Commander-in-Chief of the Armed Forces, resign, resign, “Shameless Bassijis, the source of killing the nation,” and “I will kill whoever killed my brother.”

Today’s demonstrations come as the clerical regime, fearing the increase of the people’s protests, had stationed herds of Revolutionary Guards, the suppressive State Security Force and anti-riot units around universities and important centers and locations in Tehran and other cities since the early hours of this morning.

Mrs. Maryam Rajavi, the President-elect of the National Council of Resistance of Iran (NCRI), hailed the arisen students in Tehran and other cities for taking to the streets for the second day. She said, with their slogans against Khamenei and the Revolutionary Guards, they displayed the demand of the Iranian people for the overthrow of the ruling religious dictatorship and the establishment of democracy and popular sovereignty in Iran. Time has come for the international community to acknowledge the reality that the religious fascism ruling Iran does not represent the Iranian people, and recognize the national call for the overthrow of the mullahs, Mrs. Rajavi said.

Secretariat of the National Council of Resistance of Iran
January 12, 2020