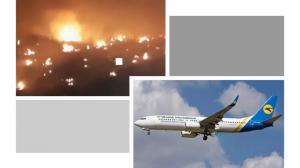 PARIS, FRANCE, January 11, 2020 /EINPresswire.com/ — Earlier this morning, Amir Ali Hajizadeh, commander of the IRGC’s Aerospace Force, (one of the five IRGC branches), reluctantly admitted the downing of the Ukrainian airliner by the IRGC. "When I was informed, I immediately informed the authorities on Wednesday morning. I was in the west of the country and immediately came to Tehran. I called the authorities on the way and told them what has happened. I told them that there is a high probability that we have struck our own aircraft. I repeat again, as I was informed in the first hour, I informed the authorities."

This makes it abundantly clear that Khamenei and Rouhani were aware of the downing of the aircraft by the IRGC from the very first hours. But after a 72-hour delay, and following extensive domestic and international pressure, they outrageously claimed that they had been informed today or yesterday. This shows that the regime's leaders are continuing their lies and concealment.

Earlier, Ali Rabi'i, Rouhani’s Spokesman and a former deputy Intelligence Minister, Ali Abedzadeh, head of the Civil Aviation Organization, Hessamuddin Ashna, a former deputy Intelligence Minister and Rouhani's political adviser, and Mohammad Islami, the regime's Minister of Road and Urban Development, categorically denied the downing of the Ukrainian plane and dismissed it as a technical failure.

Ali Rabiee described the reports on firing on the plane as a psychological operation by the US government. "No missile has hit the plane … if any object would have hit it, there would have been an explosion in the air and the pieces should have scattered in a wider area," said Ali Abedzadeh. Hesamuddin Ashna brazenly warned reporters to "refrain from participating in psychological warfare over the Ukrainian plane and stop cooperating with those who are fighting with Iran." Mohammed Islami emphasized: "Rumors that … the plane was shot … is not correct and the technical problem was the cause of the accident"

Mrs. Maryam Rajavi, the President-elect of the National Council of Resistance of Iran (NCRI), emphasized that the ruling religious fascism continues to engage in deception and concealment about the Ukrainian aircraft and called on the international community to intervene to uncover the details of this horrific crime and bring the perpetrators to justice. She said those responsible were none other than Khamenei as Commander-in-Chief of the Armed Forces, Rouhani and the IRGC commanders. The same people are responsible for the massacre of more than 1,500 youths and protesters in November. Two months after the uprising, they continue to refuse giving the actual death toll of the martyrs, the wounded and those arrested.

Secretariat of the National Council of Resistance of Iran
January 11, 2020