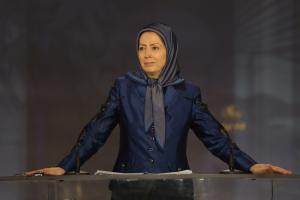 Maryam Rajavi: Downing of passenger jet is a major crime that people will neither forgive nor forget 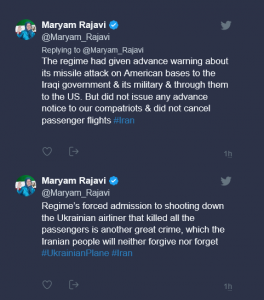 Maryam Rajavi: Regime’s forced admission to shooting down the Ukrainian airliner that killed all the passengers is another great crime

Khamenei, Rouhani, IRGC commanders are main culprits and must be prosecuted and punished

Khamenei, Rouhani, IRGC commanders are the main culprits and must be prosecuted and punished”
— Maryam Rajavi

PARIS, FRANCE, January 11, 2020 /EINPresswire.com/ — The Iranian regime’s President Hassan Rouhani and the Command Headquarters of the armed forces were forced to admit this morning, after 72 hours of stonewalling, deceptions and outright lying, that a Ukrainian Airlines passenger jet had been shot down by an IRGC surface-to-air missile.

The reluctant admission came after widespread protests and intelligence disclosures, the release of pictures and video clips and confirmation by the United States, Canada, the United Kingdom, NATO and many other international sources. In the past three days, many of the regime’s leaders, including Rouhani’s spokesman and the head of the civil aviation organization brazenly claimed that the plane had crashed due to mechanical failure.

Mrs. Maryam Rajavi, the President-elect of the National Council of Resistance of Iran (NCRI), repeated her condolences to the families of the victims and to the people of Iran. She added this was another major crime by the religious fascism ruling Iran, which the people of Iran will neither forgive, nor forget. The mullahs had given advance warning about the missile attack on Iraqi soil to the Iraqi regime and military and through them to the U.S. according to the regime’s foreign minister. But in a stark mark of culpable negligence, it refrained from ordering the cancellation of all commercial flights, whereas all around the world, such flights are canceled immediately at times of military conflict and air defense alert.

Mrs. Rajavi said Khamenei, Rouhani and the IRGC commanders were the main culprits and must be prosecuted and punished for this great crime. She underscored that even now the regime is deceptively trying to help the main culprits in this disaster evade responsibility by making ridiculous excuses.

Secretariat of the National Council of Resistance of Iran
January 11, 2020