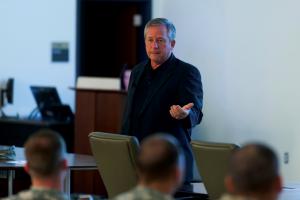 Whelden is a motivational speaker on leadership and life lessons and is the author of, “LEADERSHIP: The Art of Inspiring People to Be Their Best”

SANTA MONICA, CA, UNITED STATES, December 6, 2019 /EINPresswire.com/ — I recently retired from 40+ years of public service: 30 in an Army uniform and another 10 as a member of the Senior Executive Service–mostly with the U.S. Marine Corps. I served the nation under every president since Richard Nixon.

Seeking something both enjoyable and meaningful in this newest chapter of my life, I signed on with two luxury cruise lines as a speaker. Several weeks ago, I completed my first cruise and passengers were eager to pry from me which side of the ideological spectrum I was on.

I found myself taking the default position of most retired senior officers that our allegiance was (and should be) to the nation and the constitution, not to any particular administration or ideology. I was willing to talk about policies.

Personalities? Not so much.

One area I was happy to address was my great frustration with the very toxic—and in my view, destructive—politically polarized environment we currently find ourselves in. Most passengers shared that view.

*******
This week, Professor Jonathan Turley testified before the House Judicial Committee on Impeachment. In his 53-page opening statement, the last few paragraphs resonated with me:

“In this age of rage, many are appealing for us to simply put the law aside and ‘just do it’ like this is some impulse-buy Nike sneaker….

…Both sides in this controversy have demonized the other to justify any measure in defense… Perhaps that is the saddest part of all of this. We have forgotten the common article of faith that binds each of us to each other in our Constitution.”

In Robert Gates’ recent book “Duty: Memoirs of a Secretary at War,” he writes:

“Progress in America historically has come from thinkers and ideologues on both the left and the right, but the best of those ideas have been enacted into law through compromise. Now moderation is equated with lacking principles, and compromise with ‘selling out.’

This problem goes deeper than personalities, and I have seen it intensify greatly since first arriving in Washington in 1966. As secretary, I greatly missed the ‘bridge builders,” most of whom left Congress because of their own frustrations in the House and Senate.”

Major General Craig Whelden, U.S. Army (Retired) served 30 years in an Army uniform followed by another nine as a member of the Senior Executive Service for the Marine Corps. He is a motivational speaker on leadership and life lessons and is the author of the multiple award-winning, #1 international best-selling book, LEADERSHIP: The Art of Inspiring People to Be Their Best.