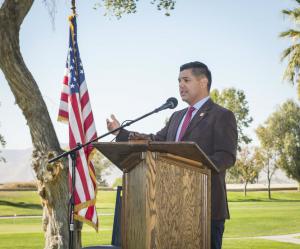 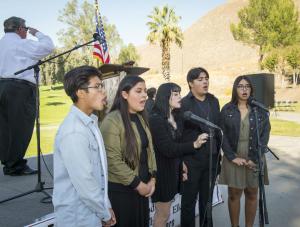 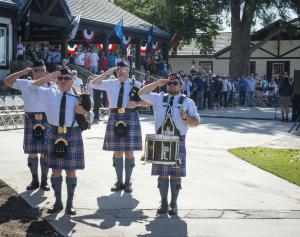 The ceremony begins with a performance by a Scottish pipe band. 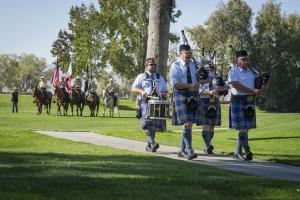 The pipe band is followed by a Sheriff’s Department mounted posse.

"This is a holy day for veterans," said Congressman Ruiz. "It is our veterans, who have put their country above themselves, that have made the United States of America the most remarkable and strongest nation in the world."

He stressed that all citizens uphold a strong sense of community for those who have served and "respect and treat our veterans with acts of kindness," adding that "our doors are open to any veteran who needs assistance."

The event, called A Salute to Our Veterans, “honored men and women of our nation's armed services for their bravery, dedication and contribution to freedom in America," said Muriel Dufresne, Community Affairs Director, Golden Era Productions, which hosted the celebration.

The ceremony opened with a flyover tribute followed by a procession across the green by bagpipers from the University of California Riverside Pipe Band, performing “A Scottish Soldier.” Just behind was a mounted posse from the Sheriff’s Department, which presented the colors.

The ceremony culminated with a five-gun salute by the American Legion #53 Honor Detail team and all attending joined in the singing of “America the Beautiful.”