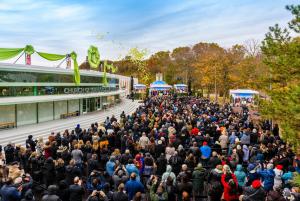 MORE THAN A THOUSAND cheer as game day for the Church of Scientology kicks off with a new 50,000-square-foot facility opening her doors to Central Ohio. 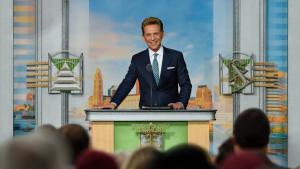 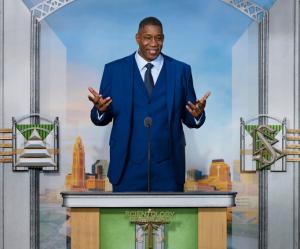 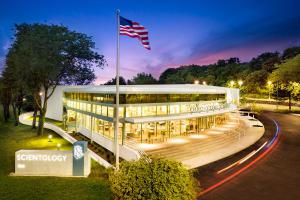 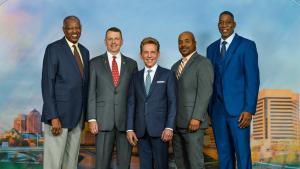 City and state leaders welcome new Church along Route 33 in the heart of Buckeye country.

These kids understand that when they stare down the road of addiction, it is a dead end. And with your new Church, we are going to see so many more turning around before they hit that dead end.”
— Willie Burton, former NBA star and President of Educated Stars of Tomorrow

COLUMBUS, OHIO, USA, November 13, 2019 /EINPresswire.com/ — Call it the heart of America. Call it a land where folks are as genuine as apple pie and soda pop. This is Central Ohio, and right at its apex stands Columbus, the state capital and one of the fastest-growing cities in the nation.

The youngest sibling of Ohio’s three C’s (alongside Cleveland and Cincinnati), Columbus teems with entrepreneurial energy and a continually transforming urban profile, rightfully earning it the nickname: Biggest Small Town in America. But, of course, what truly defines this slice of the Midwest is its undying passion for the Ohio State Buckeyes football team—eight-time national champions and perennial Big Ten contenders.

While minutes from their famed “Horseshoe” stadium, on the crisp fall afternoon of Saturday, November 9, Scientologists and guests gathered for a different kind of game day: the opening kickoff of a new Church of Scientology for Central Ohio.

On a crisp Ohio afternoon, Mr. Miscavige is joined by a jubilant crowd in celebration of their remarkable achievement.

Mr. David Miscavige, the ecclesiastical leader of the Scientology religion, addressed all in attendance, including those parishioners who helped bring this new Church to life: “Thank you very much, and what an honor to stand in Columbus on the day you dot the ‘I’ in Ohio! Consequently, and needless to say, this is also a day to swell your chests with Midwest pride. Because while Columbus may have discovered America, thanks to your perseverance, tenacity and sheer audacity, you just gave America a new Church of Scientology with which she can now discover herself.”

Opening festivities saw a 20-piece marching band—evoking The Best Damn Band in the Land—performing the joyful refrain of “Hang on Sloopy.” Ohio’s official rock song, this classic number proved an inspiring prelude to a chorus of dignitaries hailing what had come to fruition—a beacon for community collaboration and change throughout Central Ohio.

In contrast to her natural beauty, the state’s rural and urban zones have been hit by social upheaval. No crisis comes faster to mind than the opioid-fueled drug epidemic, responsible for the deaths of 4,000 Ohioans a year and topping national rankings. Consequently, the Church drives a Truth About Drugs education program that has already enlightened more than 200,000 students. In the same vein, the Church sponsors a Human Rights initiative forming the curriculum of local youth camps and a morals education program based on the book The Way to Happiness, now empowering at-risk kids with common sense, life-guiding principles.

As a hub for social betterment outreach, the city’s new Church of Scientology will provide the linkage between Central Ohio and its citizens’ passion for helping their fellows. From the Church’s prominent location on US Highway 33, where upwards of 70,000 commuters pass daily, the new 50,000-square-foot facility will serve the entire region, from Downtown Columbus out to Dayton and Mansfield.

Ohio State Representative Adam Miller applauded the Church and its heartfelt devotion to community action: “You have engaged school superintendents, principals and health officials to tackle drug abatement. You’ve engaged our City Block Watch program to safeguard our streets against crime and rights abuse. You’ve taken on leadership roles on civic boards for championing cleaner, sustainable communities. And it’s all been extremely well received. So yes, we cherish your ‘old-fashioned,’ Midwestern approach of neighborhood friendship, neighborhood responsibility and neighborhood commitment.”

Albert Long Jr., Executive Officer for the Ohio School Boards Association Black Caucus, highlighted the work of Scientologists in the name of effecting social change with The Way to Happiness.

Dr. John Howard, Co-founder of the Greater Columbus Basketball Legend Association, underscored the impact of Scientology Founder L. Ron Hubbard’s study philosophy: “I may be biased, but I believe Study Technology is Mr. Hubbard’s most important discovery. When you look at his work, you can see the meticulous thought he put into it. You see how he examined what he saw and came up with real solutions. He was a genius so far ahead of his time. And we will see his humanitarian legacy roll right through the ages. So here, with this center for his teachings, this new Church of Scientology in the Midwest soul of America, we can continue to marvel at his thoughts, his inventions and his methods that are reigniting the human spirit.”

And finally Willie Burton, former NBA star and President of Educated Stars of Tomorrow – Excel U Program, spoke of the winning formula of Drug-Free World: “Together we are helping Ohio kids make the right play. From now on, these kids understand that when they stare down the road of addiction, it is a dead end. And with your new Church, we are going to see so many more Buckeye students turning around before they hit that dead end. Which means today we are celebrating a whole lotta good right here in this city. So sure, people may ask me, ‘What was it like scoring 50 points in a single game?’ But now I am going to take the opportunity to ask you, ‘What was it like to build this Church as a center for change here in Columbus?’ Because this sure is an all-star feat, if ever I’ve seen one. And now, it’s time for you to take the limelight. Congratulations!”
________________________________________

The new facility welcomes both Scientologists and anyone wishing to find out more about Scientology.

Upon entering the new Church of Scientology of Central Ohio, visitors are welcomed by a Public Information Center presenting an introduction to Dianetics and Scientology. Its displays, containing more than 500 films in 17 languages, share the beliefs and practices of the Scientology religion and the life and legacy of Founder L. Ron Hubbard.

The Information Center further presents the many humanitarian initiatives that Scientology supports, including their worldwide human rights education campaigns; far-reaching drug education, prevention and rehabilitation program; global network of literacy and learning centers; and the Scientology Volunteer Ministers corps, which has become one of the world’s largest independent relief forces.

Central Ohio’s Chapel provides for all Scientology congregational gatherings, including Sunday Services, Weddings and Naming Ceremonies. Furthermore, the Chapel is open to the entire community and any denomination for a wide range of events. From banquets and seminars to workshops and lectures, it’s all in the name of repairing communities across Central Ohio.

The Café offers a place to mingle, whether for visitors touring the Church, those attending its many scheduled events or parishioners during breaks in their Scientology services.

The new Church allows for the delivery of all introductory seminars and courses imparting an overview of fundamental principles of Dianetics and Scientology and their application for living. Among the most popular are the Personal Efficiency Seminar, Success through Communication Course and an array of Life Improvement Courses, each designed to help better a specific facet of one’s life.

In addition to Introductory Services, the Church features an entire wing of specially appointed rooms for providing Scientology auditing (one-on-one spiritual counseling). Those training to become auditors (Scientology counselors) will now be able to study in a wing of multiple course rooms, each one uniquely configured to a specific aspect of training.
________________________________________

This opening of the new Church of Scientology of Central Ohio drives ever forward a decade of explosive expansion for the religion, with over 70 new Churches of Scientology in global cities—from Orlando to Perth, Dublin to Detroit and Kansas City to Johannesburg.

More Church openings are planned in the next 12 months for cities across North America, Australia, Europe and the United Kingdom.