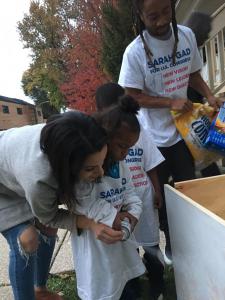 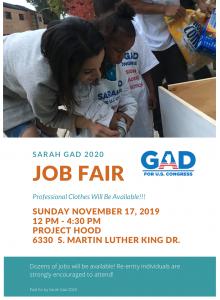 Sarah Gad recently launched her campaign for U.S. Congress in Illinois' First District, and she is already starting to go after key issues in her platform.

CHICAGO, ILLINOIS, USA, November 12, 2019 /EINPresswire.com/ — Chicago-based activist Sarah Gad recently kicked off her campaign for U.S. Congress in Illinois' First District. The 32-year old law student and former Cook County inmate has only been in the running for a few weeks, but has already raised close to $30,000 and garnered attention from important names like prominent Chicago Pastor Corey Brooks, best-selling author Brian Cuban, and former Obama Medicare/Medicaid Administrator Andy Slavitt. Slavitt, who was recently joined by Gad and former Congressman Patrick Kennedy in a Last Day podcast episode about the opioid crisis, commended Gad for using her powerful story as a vehicle for change.

But, Gad's compelling backstory isn't the only thing that's garnering her widespread support. It's her unique style of campaigning—one that simultaneously aims to address key issues in her platform. Last week, her campaign unveiled a Sarah Gad 2020 blessings box, a clever humanitarian alternative to a yard sign. Next week, Gad's campaign is hosting a job fair/meet & greet to address the city's high unemployment rate and income disparities.

Gad is a third-year law student at the University of Chicago and outspoken advocate for re-entry and rehabilitation. Her activism and philanthropy work in the realm of criminal justice reform and civil rights earned her the 2019 University of Chicago Humanitarian Award. If elected, the 32-year old will become the nation's first formerly incarcerated female legislator.

The Sarah Gad 2020 job fair is set to take place Sunday, November 17th, from 12:00 p.m. – 4:30 p.m. at Project HOOD Communities in the South Side neighborhood of Woodlawn. Gad's campaign has enlisted employers across various industries who are amenable to hiring people with criminal backgrounds. The fair will also include a professional clothing drive and resumé station led by graduate student volunteers. Gad says she hopes to see as many residents as possible attend the fair and leave employed. Project HOOD receptionist Dale Holton says the upcoming job fair has generated a lot of anticipation in the neighborhood. "Our phones have been blowing up all week about about this fair," says Holton.

For more information about the Sarah Gad 2020 job fair, the positions available, or how to reserve a table for your place of business, contact the campaign's outreach coordinator, Dr. Sabha Abour, at drabour@sarahgad2020.com or 773-236-0041.