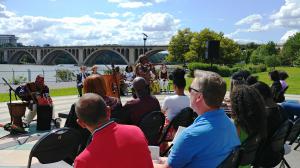 Ms. Andrena Crockett tells the story of the slaves who arrived in 1732 in that spot 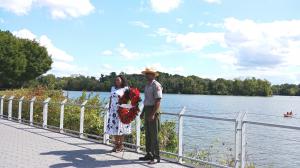 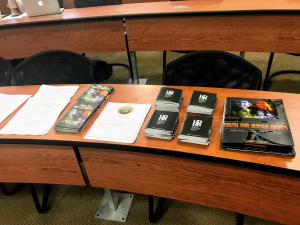 We cannot forget this important history. Slavery in all forms has to be eradicated and human beings respected.”
— Beth Akiyama of United for Human Rights

WASHINGTON, DC, US, September 12, 2019 /EINPresswire.com/ — The Georgetown Waterfront on the Potomac River in Washington, DC, was the site of one of the many nationwide observances of the 400th Anniversary of African American History. The anniversary was marked with a wreath laying to commemorate the enslaved Africans who arrived there by ship in 1732 – 65 souls on the Liverpool Merchant and 89 on the William & Betty. The event was coordinated by the National Park Service, DC City Government and the Georgetown African American Historic Landmark Project and Tour. United for Human Rights DC engaged members of the diplomatic community to participate as well.

At the same time, the District of Columbia hosted “The Ringing of the Bells” in conjunction with DC’s religious community. Washington National Cathedral, All Souls Unitarian Church, Grace Episcopal Church and others rang their bells, one minute for each 100 years of enslavement.

In December 2018, the Georgetown waterfront was designated a United Nations Educational, Scientific and Cultural Organization (UNESCO) Site of Memory and placed on the UN registry along with more than 30 United States ports and international locations.

In 2001, at the World Conference against Racism, Racial Discrimination, Xenophobia, and Related Intolerance, in Durban, South Africa, international recognition of the slave trade and slavery as a crime against humanity, was marked.

Andrena Crockett founder of the Georgetown African American Historic Landmark Project said, “To begin the process of healing for some and reconciliation for others, at a minimum their presence and contributions must be shared. It is important to memorialize, in some form, the people, places, and events. For humanity’s sake, the millions of enslaved unwillingly brought to this country, including to Georgetown, have the right as human beings to simply be remembered and their contributions acknowledged.”

His Excellency Dr. Barfuor Adjei-Barwuah, the Ambassador of Ghana, participated in the ceremony as well as embassy staff from other embassies who attended the observation of the landing in Georgetown.

“We cannot forget this important history. Slavery in all forms has to be eradicated and human beings respected,” said Beth Akiyama of United for Human Rights, which was a partner in the event. “Slavery violates human right #4 of the United Nations Universal Declaration of Human Rights and yet it continues today in modern forms of slavery. We must continue to expose and eradicate it.”

To find out more about human rights go to www.humanrights.org. Free booklets and videos are available for download or for teachers to order. United for Human Rights is a nonprofit organization whose mission is to teach human rights, specifically the United Nations Universal Declaration of Human Rights. Their most recent campaign has included #KnowYour30 with the purpose of increasing awareness of the 30 human rights every person has – and how they are a part of everyday life. To learn more go to https://www.humanrights.org or watch a documentary on https://www.scientology.tv/series/voices-for-humanity/mary-shuttleworth.html

What are human rights