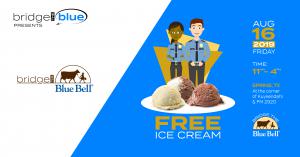 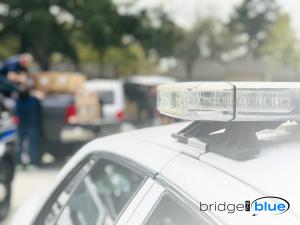 It’s important that communities understand that our men and women in blue aren’t any different than anyone else. They’re just ordinary people that are tasked with an extraordinary job.”
— Troy Skeen

SPRING, TX, UNITED STATES, August 15, 2019 /EINPresswire.com/ — Bridge the Blue has partnered with Klein ISD Police Department and other local law enforcement agencies for a community outreach they’re calling Bridge the Bluebell. The outreach is designed to open up a dialogue between the community and local law enforcement. The outreach will take place on Friday, August 15, 2019, in Spring, TX on the corner of FM 2920 and Kuykendahl, from 11 am to 4 pm.

The idea is to provide a fun, friendly environment where people can have some great food, cool off with some free & unlicked Bluebell ice cream, and build community. Bluebell Ice Cream and Walmart have donated ice cream and other supplies to show their support for the cause. A food truck from Brazilian Joe’s will also be present along with officers from various departments and precinct 4.

“It’s important that communities understand that our men and women in blue aren’t any different than anyone else. They’re just ordinary people that are tasked with an extraordinary job to protect and serve,” says Bridge the Blue founder, Troy Skeen.

During a time where police shortages plague our nation and public perception is at an all-time low, officers across the country have expressed concerns about their own personal safety.

According to a poll taken in 2017, 93% of peace officers say their jobs are harder today due to public perception. Furthermore, it seems like social media continues to be a breeding ground for false narratives that give birth to skewed views.

“So many times, people are quick to share all the negative news – why by the way, the negative stuff is the exception, not the rule. But if people were bold enough to share all the positive things law enforcement does for our communities, it would drown out all the other noise,” adds Troy. “We just want peace officers all over the nation to know that we have their backs.”

Are You Bold Enough to Bridge the Blue?