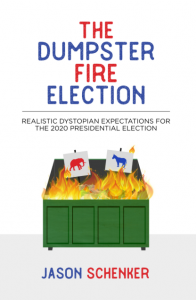 The full title of the book is The Dumpster Fire Election: Realistic Dystopian Expectations for the 2020 Presidential Election and it was released on 26 June 2019, just in time for the first Democratic primary debates.

"I wrote The Dumpster Fire Election to help people prepare for the potential impact of the coming U.S. election. After all, U.S. presidential elections are important for the economy and financial markets," noted Jason Schenker, who is the President of Prestige Economics and Chairman of The Futurist institute.

"Even though people talk about elections, it is very difficult to find in-depth, objective, quantitative analysis of election data. Doing this kind of analysis is something I previously did in my books Electing Recession (2016) and Midterm Economics (2018)," noted Schenker."Now, going into 2020, the rhetoric is likely to be dialed up even further. In an era of clickbait, fake news, biased reporting on both ends of the political spectrum, and over-democratization of opinion that makes anyone (or any entity) on social media a full-on media pundit, there is a greater need than ever for actual analysis. There is a need to look at numbers and trendlines that go beyond the headlines. These topics are core elements of The Dumpster Fire Election."

The paperback edition of The Dumpster Fire Election was released by Prestige Professional Publishing on 26 June 2019. It is Jason Schenker's 18th book.

The Dumpster Fire Election can be found online at www.dumpsterfireelection.com