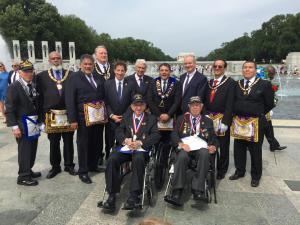 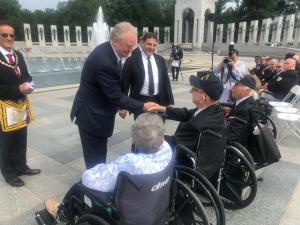 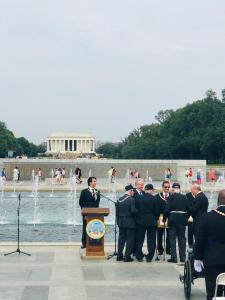 WASHINGTON, DISTRICT OF COLUMBIA, UNITED STATES OF AMERICA, June 7, 2019 /EINPresswire.com/ — Earlier this morning at the World War II Memorial in Washington, D.C., a solemn ceremony was organized by the Grand Lodge of Free And Accepted Masons of Washington, D.C. to mark the 75th Anniversary of D-Day.

U.S. Senator Chris Van Hollen addressed the assembly on these hollowed grounds to pay respect to those who made the ultimate sacrifice in defense of freedom and to pay homage to two Veterans of World War II.

The public ceremony, witnessed by people of all walks of life and ages, included the laying of wreaths throughout the Memorial as a special prayer was being recited in a symphony of 11 languages: English, Arabic, Armenian, Cebuano Farsi, French, German, Hebrew, Pali, Spanish, and Turkish.

The special prayer: "May the light of Justice, Toleration, and Truth conquer the forces of darkness, may brotherly love prevail, and may peace reign among the nations of the earth. This we ask in Thy Holy Name. Amen"

Before closing the ceremony, the Lord's prayer was recited in the ancient Aramaic language.

Also in attendance to pay homage to our two Veterans was Congressman Jamie Raskin of the 8th District of Maryland.