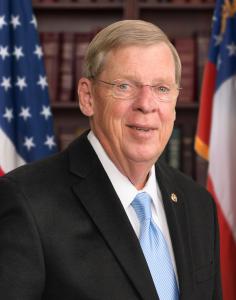 'Pause and Reflect on Our Hard-Won Freedom,' writes Isakson, chairman of the Senate Committee on Veterans’ Affairs

Almost 75 years since the end of World War II, Americans are still willing to pay the ultimate price for our freedom.”
— Johnny Isakson

The text is available below. This article and recent commentaries are also available at the Foundation's Web site, www.georgiapolicy.org.

Permission to reprint in whole or in part is hereby granted, provided the author and his affiliations are cited.

Pause and Reflect on Our Hard-Won Freedom

On June 6, 1944, with American and Allied paratroopers positioned behind enemy lines, Allied forces waded through waist-deep waters amid hailing enemy gunfire from above to storm the beaches of Normandy, France, in an invasion called Operation Overlord.

It was a joint naval, air and land assault marking the start of Allied forces’ campaign to liberate Nazi-occupied Europe. More than 6,000 Americans gave their lives that day, but their sacrifice and heroism marked the beginning of the end of World War II.

The 75th anniversary of D-Day is June 6. Now is an especially important time to reflect on the sacrifices made by the greatest generation during World War II. The defeat of fascism in Europe and an imperialism in the Pacific liberated millions of people across the globe from oppression. Those brave service members fought in the face of great adversity to defend the principles of democracy, and because of their valor and sacrifice, they set a high standard for future generations to follow.

As chairman of the Senate Committee on Veterans’ Affairs, the anniversary of D-Day is personal for me, and it reminds me of the cost of freedom. I am reminded of the men and women who made the ultimate sacrifice for our country.

A few years ago, I traveled with several other members of our committee to visit the American cemeteries in both Europe and North Africa. As my wife, Dianne, and I walked through the Netherlands American Cemetery, past each grave to pay our respects to the American soldiers who lost their lives during World War II, we paused to read the inscriptions on each white cross marking the grave of a fallen soldier. What I read on one of those grave markers brought me to tears.

In simple black letters etched in the marble cross, it read, ‘Private Roy C. Irwin, New Jersey, December 28, 1944.’ It was in that moment that I realized that the day Roy C. Irwin died fighting for America in the Battle of the Bulge was the same day I was born. Roy C. Irwin sacrificed his life for the freedom I have enjoyed and cherished for 74 years.

This week, I will have the privilege of leading a bipartisan Senate delegation to Normandy, France, for the 75th anniversary of D-Day, where we will honor our greatest generation – the heroes who fought, and for many, who paid the ultimate price. America is great today because of their sacrifice. That is what the ultimate sacrifice is all about.

Almost 75 years since the end of World War II, Americans are still willing to pay the ultimate price for our freedom. More than 2 million men and women have followed in the footsteps of our World War II veterans and signed up to join today’s all-volunteer force, despite the fact that we live in a world of unknown and dangerous threats. Without the selfless devotion of our armed forces, we would not be living in the greatest country on the face of this Earth.

I encourage everyone to join me on this milestone occasion in reflecting on the sacrifice of our U.S. service members in World War II. We honor and mourn those who paid the ultimate price to protect our freedoms.

May God bless our fallen service men and women, and may God bless the United States of America.
###

U.S. Sen. Johnny Isakson (R-Ga.), chairman of the Senate Committee on Veterans’ Affairs in the 116th Congress, wrote this commentary for the Georgia Public Policy Foundation. The Foundation is an independent, nonprofit, state-focused think tank that proposes market-oriented approaches to public policy to improve the lives of Georgians. Nothing written here is to be construed as necessarily reflecting the views of the Georgia Public Policy Foundation or as an attempt to aid or hinder the passage of any bill before the U.S. Congress or the Georgia Legislature.

© Georgia Public Policy Foundation (June 5, 2019). Permission to reprint in whole or in part is hereby granted, provided the author and his affiliations are cited.