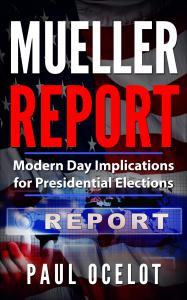 Paul Ocelot’s book offers a remarkably insightful analysis into how the Mueller report is likely to impact future presidential elections.

My goal is to provide some clarity around what has rapidly become a muddy and hotly debated issue.”
— Paul Ocelot

LONDON, UK, June 5, 2019 /EINPresswire.com/ — Author Paul Ocelot is pleased to announce the release of his book Mueller Report: Modern Day Implications For Presidential Elections. Available on Amazon as a Kindle edition, the release can currently be downloaded for free as a limited time offer.

Special Counsel Robert Mueller’s Report into the possible collusion of President Donald Trump with Russia in the 2016 election, along with the President’s possible obstruction of justice, is unprecedented. In the two years that it took Mueller to complete the report, many people were hoping for a simple answer to the question as to whether anyone affiliated with Donald Trump’s presidential campaign actually worked with the Russians to assist Trump emerge as the winner.

The release of the Mueller Report resulted in a wave of varying opinions about its conclusions, and a resolution of the issue still remains unclear. For those who would like clarity on the most important issues, Paul Ocelot’s 27-page report is a must-read.

Designed to explore the future implications for presidential elections and election strategies, the book provides a clear understanding of the main points of the Mueller Report along with an explanation of Robert Mueller’s obstruction of justice.

“It’s a complex issue,” says Ocelot. “And there are tremendous implications for the future. I’ve laid out the main points of the report in simple terms, and have provided clear explanations of everything that occurred as a result. My goal is to provide some clarity around what has rapidly become a muddy and hotly debated issue.”

Mueller Report: Modern Day Implications For Presidential Elections is available for download free of charge from June 5th to June 9th. Take advantage of this offer now on Amazon.