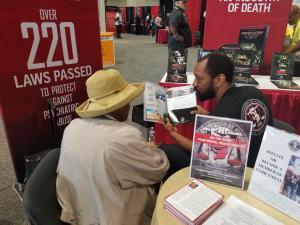 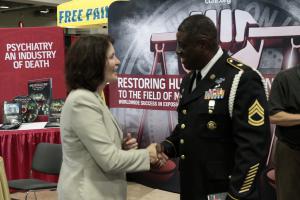 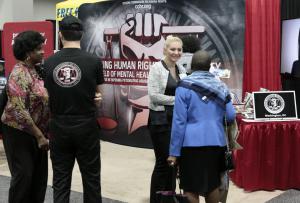 The psychiatric-pharmaceutical industry is not a public service. Its interests are new markets to tap and getting more customers for longer… One of those markets is the African American community.”
— Dr. Linda Lagemann

Citizens Commission on Human Rights (CCHR) brought its “Restoring Human Rights & Diginity to the Field of Mental Health” campaign to the 2018 Congressional Black Caucus Foundation Annual Legislative Conference to educate African-American parents and veterans about their rights and warn them of the dangers of psychiatric drugs.

This included a 2-hour “Ask the Expert” session led by Dr. Linda Lagemann, national media commentator on the mental health system. Parents and grandparents stopped by to receive information and learn their rights when a psychiatrist, doctor or school professional says their child has a “mental disorder” and needs to be on “medication.”

“Psychiatric diagnoses are entirely subjective – different psychiatrists seeing the same person often come up with different diagnoses. This subjectivity is vulnerable to prejudice and may explain why studies find African American males are disproportionately given a psychiatric diagnosis,” said Dr. Linda Lagemann. She further explained, “The psychiatric-pharmaceutical industry is not a public service. Its interests are new markets to tap and getting more customers for longer. One of those markets is younger and younger children. Another of those markets is the African American community, which historically did not drug their children at the same rate as white parents.”

CCHR cautions parents to know their rights and arm themselves with the documented facts. For instance, many do not know that Federal law prohibits school personnel from requiring parents to drug their child as a requisite for attending school (Title 20 of United States Code: Chapter 33, Subchapter II, ASSISTANCE FOR EDUCATION OF ALL CHILDREN WITH DISABILITIES § 1412, State Eligibility.)

A Chaplain from the U.S. Department of Veterans Affairs who is in charge of counseling military that return from war zone told a CCHR volunteer: “I know all about this. I witness it first-hand when I help soldiers reintegrate into society after being in a war zone. That is why I always wear a bracelet that has number 22 engraved on it.”

The 48th Congressional Black Caucus Foundation Annual Legislative Conference was held at the Walter E. Washington Convention Center in Washington D.C. with the theme “The Dream Still Demands Courage, Resilience, Leadership and Legislation.” The five-day conference attracts annually nearly 10,000 people from across the world and is the leading policy conference on issues impacting African Americans and the global Black community. The conference featured nearly 100 public policy forums on health, education, economic empowerment, the environment, and more.

Citizens Commission on Human Rights is a nonprofit charitable mental health watchdog cofounded in 1969 by the Church of Scientology and professor of psychiatry Dr. Thomas Szasz. It is dedicated to eradicating psychiatric abuse and ensuring patient protection.
With headquarters in Los Angeles, California, CCHR International guides a global human rights advocacy network of some 180 chapters across 34 nations. CCHR Commissioners include physicians, psychiatrists, psychologists, lawyers, legislators, government officials, educators and civil rights representatives.
For more information about materials or participation in the Citizens Commission on Human Rights Washington DC, contact (202)-349-9267 or write to isabelle.vladoiu@cchrdc.org or go to the website at https://www.cchr.org/