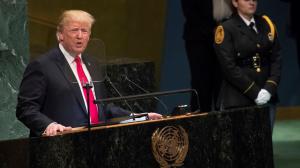 WASHINGTON, DC, USA, September 27, 2018 /EINPresswire.com/ — The American Mideast Coalition for Democracy applauds President Trump for his forceful defense of the people of Iran against the ruling corrupt theocracy and its malign influence in the region and the world. Said President Trump:

"Iran’s leaders sow chaos, death, and destruction. They do not respect their neighbors or borders, or the sovereign rights of nations. Instead, Iran’s leaders plunder the nation’s resources to enrich themselves and to spread mayhem across the Middle East and far beyond.

"The Iranian people are rightly outraged that their leaders have embezzled billions of dollars from Iran’s treasury, seized valuable portions of the economy, and looted the people’s religious endowments, all to line their own pockets and send their proxies to wage war. Not good.

"Iran’s neighbors have paid a heavy toll for the region’s [regime’s] agenda of aggression and expansion. That is why so many countries in the Middle East strongly supported my decision to withdraw the United States from the horrible 2015 Iran Nuclear Deal and re-impose nuclear sanctions.

"The Iran deal was a windfall for Iran’s leaders. In the years since the deal was reached, Iran’s military budget grew nearly 40 percent. The dictatorship used the funds to build nuclear-capable missiles, increase internal repression, finance terrorism, and fund havoc and slaughter in Syria and Yemen."

“It isn’t a surprise that the Ayatollahs would use their windfall from the Iran nuclear deal to fund terror and to further destabilize neighboring countries including Syria and Yemen,” said Iranian American, AMCD vice President, Hossein Khorram. “The fact that the Obama administration did not anticipate that shows how naïve the US negotiators, including Secretary Kerry, were.”

Instead, the Trump administration has been clear eyed in their dealing with Iran. To quote the President:

"The United States has launched a campaign of economic pressure to deny the regime the funds it needs to advance its bloody agenda. Last month, we began re-imposing hard-hitting nuclear sanctions that had been lifted under the Iran deal. Additional sanctions will resume November 5th, and more will follow. And we’re working with countries that import Iranian crude oil to cut their purchases substantially.

"We cannot allow the world’s leading sponsor of terrorism to possess the planet’s most dangerous weapons. We cannot allow a regime that chants “Death to America,” and that threatens Israel with annihilation, to possess the means to deliver a nuclear warhead to any city on Earth. Just can’t do it.

AMCD stands firmly with the President and with the Iranian people against the murderous, terrorist government of the Ayatollahs of Iran. We look forward to a better future for them and for the world due to President Trump’s bold leadership.