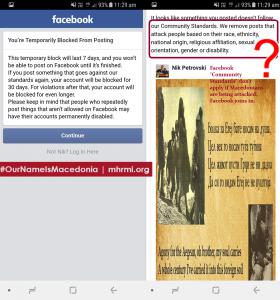 Facebook participates in anti-Macedonian hate. Demand that our human rights be respected. #OurNameIsMacedonia

It is shocking that Facebook has chosen to aid Macedonia's most notorious human rights oppressor, Greece, in denying the existence of the Macedonian nation.

The disgusting things I've been called by Greeks that I have reported apparently do not go against “Facebook community standards”. Yet, I'm in violation for defending my most basic of human rights.”
— Nik Petrovski

When Macedonian Facebook users complain about the unabashed racism that they experience at the hands of Greeks, Bulgarians and Albanians, Facebook chooses to do nothing. Twitter, on the other hand, has taken steps to defend Macedonians against such hatred. However, when Greeks express outrage at the mere existence of Macedonians, Facebook takes action against the oppressed.

For the second time in less than two months, Nik Petrovski, a Macedonian from Sydney, Australia, has had his Facebook account suspended for defending his right to exist as who he is – a Macedonian. See our press release of January 22, 2018 explaining how Mr. Petrovski's account was suspended simply for saying that Macedonia IS NOT Greek. Using Facebook's logic, one would expect Facebook to immediately condemn the UN
Universal Declaration for Human Rights and all international human rights conventions aimed at DEFENDING ethnic groups against hate and cultural genocide.

"The disgusting things I've been called by Greeks that I have reported apparently do not go against “Facebook community standards”. Yet, I'm in in violation for defending my most basic of human rights. Why the double-standard Facebook? Why do you openly support racism against Macedonians?" asked Nik Petrovski.

Facebook, we DEMAND an immediate answer to Mr. Petrovski's question and an immediate reversal of your racist policy.

According to Facebook's so-called "community standards", "We remove posts that attack people based on their race, ethnicity, national origin, religious affiliation, sexual orientation, gender, or disability."

Facebook, we demand that you act now, apologize, and reverse your hateful anti-Macedonian policy. Abide by your own self-proclaimed principles.

Macedonians, join our call to demand immediate action from Facebook. Join MHRMI's #OurNameIsMacedonia campaign in defence of Macedonia and Macedonians and an immediate end to the anti-Macedonian name negotiations. OUR NAME IS MACEDONIA. Demand respect for it.