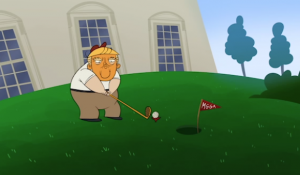 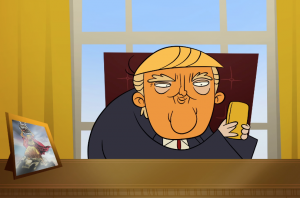 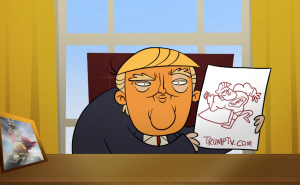 Trump drawing of himself as super hero

TrumpTV.com announced that it will be producing new Oval Office episodes of the hugely successful animated mini-series ‘Bad Days’ at BadDays.com

Los Angeles, CA— 3/01/2018 — Today, TrumpTV.com announced that it is producing new Oval Office episodes of the hugely successful animated mini-series ‘Bad Days’, the original 36-episode mini-series, which parodied super heroes having a tough day.
This celebrity extension of the series will initially take a humorous look at a President’s Bad Day.

“Presidents can have Bad Days too, especially today”, said TrumpTV.com’s Fernando Escovar, “so we decided to add a humorous White House twist to what has become a very successful on-line animated mini-series. With everything going on today in the world of politics, it just seemed like a natural area for us to focus on. President’s, politicians, and state leaders offer up a deep and rich source of story possibilities.”
Added Escovar, “What Stephen Colbert and Showtime have done with their new long form Donald Trump series “Our Cartoon President” is fantastic. Our goal is much simpler, we just want to create and deliver fun bite sized animated celebrity and super hero parodies that will generate a smile. Today all of us really need a little cheering up”.

From Executive Producer Stan Lee, the legendary creator of Marvel Comics, and creators Junaid Chundrigar and Davor Bujakovic, the original Bad Days series (BadDays.com) has enjoyed remarkable success, accumulating over 500+ million on-line views. It has also been featured in the ABC series Betrayal as well as on Virgin America’s in- flight entertainment.

The Oval Office is having some Bad Days with President Trump golfing on the White House lawn.