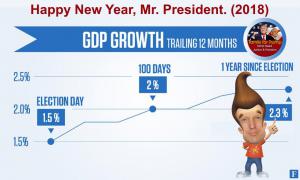 Congratulations on your well-deserved success in our economy

May God bless you and your family with the strength to carry on continuously as our 45th President with the same courage, wisdom and the optimism that you have shown to American people during your presidential campaign and your first year in office in 2017.

The New Year is a time of hope and renewal. The Tamils for Trump group wishes the president- will work for international justice for the Tamil victims either through ICC or International Tribunal for those war crimes committed by Sri Lankan officials during the ethnic war that killed over 145,000 Tamils.

No Singhalese has ever been held accountable for any outrage against Tamils since the independence from the British. Justice and Truth are overdue, and we expect that 2018 is the year in which Tamils should get them.

US acted rightfully and courageously in helping the victims in South Sudan to determine their own destiny. The same thing must be done for Tamil victims in the northeast of Sri Lanka, and we hope you will get it done.

There is a need to help the Tamil victims in northeastern Sri Lanka to determine their own destiny and reestablish Tamils’ independence. We hope that Tamils can return to that stability enjoyed before the colonization by the Europeans in the island of Sri Lanka.